(CNN) -- Nadya Suleman, the Southern California woman who gave birth to octuplets in January, has fired a nonprofit group of nurses charged with helping care for her children, CNN affiliate KTLA has reported. 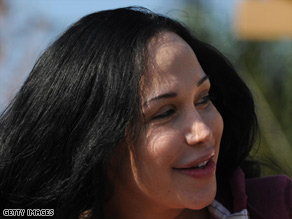 Suleman accused the nurses, from a group called Angels in Waiting, of spying on her to report her to child-welfare authorities, the affiliate reported Monday.

The group was working for free, the affiliate said. Suleman instead will rely on nurses whom she is paying, Suleman's attorney said.

She now has four of the octuplets at home, along with her six other children. The other octuplets remain in a hospital, which is discharging them two at a time to ease the adjustment.

Suleman -- already a single mother with six young children -- gave birth to the octuplets through in-vitro fertilization, fueling controversy. News of her collecting public assistance for some of her children also outraged many taxpayers.

She has not identified the father of the children, but spoke about him in a new video released on RadarOnline.com.

He is a foreign-born man who lives in California and is the father of all 14 of her children, Suleman said.

The man was angry when she told him that she was having eight more children, she said.

"He was angry at the doctor, like everyone else," Suleman said. "He is a good friend -- a platonic friend. We would not be very compatible. As far as I am concerned, I would never disclose who he is."

At one point in the video, a child's voice can be heard asking Suleman the man's name.

She did not answer.

All About Nadya Suleman • In Vitro Fertilization