Tenant evicted even though she pays rent on time

ROOSEVELT, New York (CNN) -- When Lisa Brown moved into her rental house on Long Island last summer with her three daughters, she says, it felt like a new beginning. 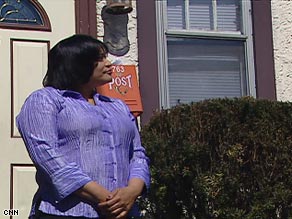 After living in apartments, the spacious house got her attention immediately. "It was bigger than what I had lived in," she says. Brown was also won over by the neighborhood with its tidy homes and good school district. "I wanted to come here, and I wanted to see my kids graduate from this school district."

But they hardly had a chance. Instead, fighting back tears, she says, "I have to get out."

Brown and her family are being evicted not because of anything they did, but because her landlord defaulted on the mortgage and the house fell into foreclosure. The house was recently sold at auction.

The bad news came just seven months after Brown had moved in. A real estate broker came to the door and handed her an eviction notice, telling her she had 30 days to vacate. "I was hysterical, I was like, what do you mean?"

Watch Lisa Brown's talk about why she has to move »

The broker explained that the landlord no longer owns the property and that the lease was no longer valid. Brown had no idea the house was in foreclosure. As a tenant, she always paid her rent on time, and she assumed the rent was going toward the mortgage.

See how the public and the markets react to President Obama's news conference
Tomorrw 6-9 a.m. ET

Unfortunately, Brown is not the only tenant caught off guard. According to the Center for Housing Policy, nearly 20 percent of all foreclosures are on rental properties, and tenants' rights in such situations are minimal.

In most states, when a bank forecloses on a landlord, the tenant has no guarantee of being allowed to stay in the property, and neither the bank nor the landlord has a legal obligation to tell the tenant about the foreclosure. So while the owners know what's going on, renters are usually kept in the dark.

New York State Sen. Jeff Klein is aware that renters can run into problems. "In many instances, they're actually paying their rent on time, and the owner of the property who is in foreclosure is pocketing the money," he says.

Klein says rental properties are involved in 50 percent of all foreclosures in New York, and he is working on a law to warn renters of foreclosure proceedings ahead of time and to keep them from losing their security deposit and being evicted with nowhere to go.

Similar laws are already in place in Ohio, Illinois, Minnesota, Maryland, Rhode Island, Michigan and California. "What we're facing here", Klein says, "is sort of the new homeless population unless we do something about it."

Brown was astonished to learn that her landlord rented her the house when she knew she was losing it. "She knew that this house was foreclosing on her. She did nothing about it. Nothing, except take my money."

Brown was paying $1,900 a month in rent. She had also paid $5,700 for a security deposit and broker fees to secure the house. She says that money is gone. "She will not give me my deposit back. Nothing."

CNN tried to reach the owner, who lives upstairs, for comment, but her phone was disconnected, and no one answered the door. The broker who rented her the house and who was paid $1,900 says he did not know the house was in foreclosure. He also says the brokerage fee will not be returned.

"It took everything I had to move in," Brown says, "to give my kids a better environment." And now, "I'm left out with nothing."

Because eviction papers trump the lease, Brown has no legal right to stay. The bank that foreclosed on the house, and now owns it, offered her $1,000 to get out, but she says she's lost close to $6,000 and has nowhere to go.

"If it was me, yeah I could move out and go on my own. But it's my family you're talking about, my children, my three daughters and my pets, that I brought in here thinking that we were going to stay and be happy."

Brown is considering suing the owner in small-claims court to get her money back and cover moving expenses. For now, though, she says she will adjust her dreams and find another place for her family to live.