NEW YORK (CNN) -- Bidding failed to meet expectations Saturday on a uniquely complete skeleton of a Jurassic-era dryosaurus -- a long-necked, plant-eating dinosaur -- so it was no-sale for the centerpiece at an auction of rare skeletons, fossils and other prehistoric memorabilia. 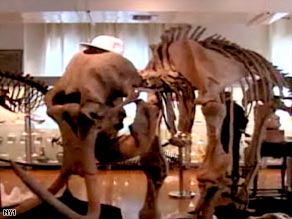 Fossils including dinosaur skeletons are on display at the I.M. Chait Gallery on Saturday.

Auctioneers at the I.M. Chait Gallery had hoped the 150-million-year-old, 9-foot-long dryosaurus would sell for as much as $500,000, but the bidding did not add up.

Two museums are said to still be interested in acquiring the skeleton, being sold by Western Paleontological Laboratories out of Utah.

Both were bought by private collections.

"The woolly is so special because it wasn't fully grown and can therefore fit in someone's living room," says Josh Chait, director of operations at the gallery. "A collector's dream."

The ammonite, an extinct marine animal, turned to opal as part of the fossilizing process. Ammonite fossils have been found in ancient seabeds in Alberta, Canada.

All About Paleontology • Auctions