(CNN) -- Nadya Suleman, who gave birth to octuplets in January, brought two of her babies home from the hospital late Tuesday. 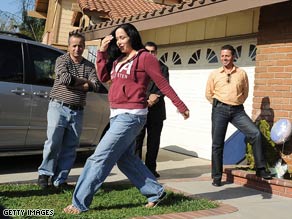 Nadya Suleman walks outside her new house for a video crew in La Habra, California, on March 10.

She brought the infants to her new house in La Habra, California. Members of the media and gawkers crowded the cul-de-sac, as news helicopters hovered overhead. Media swarmed the family's vehicle as it slowly made its way through the crowd, into the home's garage.

"Both infants are able to bottle feed, are gaining weight and are able to maintain their body temperature," the release said.

"This is a happy moment for everyone -- the family, physicians, nurses and entire NICU (neonatal intensive care unit staff)," the release quoted neonatologist Mandhir Gupta as saying. "It is always rewarding whenever a premature infant goes home as a healthy baby."

The remaining six babies continue to progress well at the hospital, Kaiser said. All continue gaining weight as they get formula or donated breast milk.

Hospital representatives made several home visits before the babies were discharged, to determine whether Suleman could provide safe housing, enough child care support and the supplies needed to care for the first two children, Kaiser said.

Until recently, Suleman had been sharing another home with her parents and her other six young children. But that house ended up at risk of foreclosure, and Suleman moved into her own home.

Last week, she disputed news reports that her father had bought the new house.

"I earned it. ... No, my father did not purchase this house for me. I did it on my own," Suleman told Radar magazine's Web site during a recent video tour of the 2,583-square-foot house.

"It's 1,000-square-footage bigger than the old house," she said on the video. "They [her older children] like it more than Grandma's house." Watch Suleman take other children to theme parks

Showing the new house to Radar, Suleman toured the living room, dining room and kitchen, and a den off the kitchen that she said she planned to turn into a nursery.

All the cribs will be kept in that room and two babies will share each crib, she said at the time, "unless one is sick, because they are so strong and healthy right now. ... Six are ready to come home."

Suleman, 33, added that they would come home two at a time.

"Two are little and they need to gain weight, and that's it. There's no medical problem," she said.

People.com reported that their new home, which was listed for $564,900, has four bedrooms and a large back yard.

"My ultimate goal is not to be a burden on ... taxpayers," she told Radar. "So there have been a couple of offers. ... I selectively picked a couple of opportunities to earn some resources for the kids."

Suleman gave birth to the octuplets through in-vitro fertilization, fueling controversy. News of her collecting public assistance for some of her children also outraged many taxpayers.