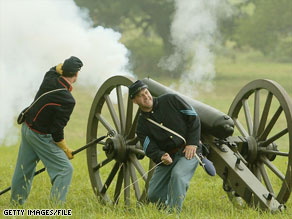 Civil War reenactors fire a cannon at the Gettysburg, Pennsylavnia, battlefield in 2003.

"In town after town, the irreplaceable battlefields that define those communities are being marred forever," said James Lighthizer, the head of the Civil War Preservation Trust.

"As we approach the sesquicentennial of the bloodiest conflict in our nation's history, we need to be more aware than ever of the importance of preserving these sacred places for generations to come."

The group says it has helped save more than 25,000 acres of Civil War battlefields in 18 states.

Topping the 2009 list of endangered battlefields is Monocacy, Maryland, where the Preservation Trust wants to prevent a trash-processing facility with a 350-foot smokestack from being built nearby.

In Virginia, the group is fighting to keep a Wal-Mart Supercenter from going up on the edge of the Wilderness Battlefield, which also is on this year's list. On that site, 160,000 Union and Confederate troops fought a two-day battle in 1864.

"These hallowed battlegrounds should be national shrines, monuments to American valor, determination and courage," actor Richard Dreyfuss said in prepared remarks. "Once these irreplaceable treasures are gone, they're gone forever." Dreyfuss has been involved in a pair of Civil War documentaries.

Rounding out the group's Top 10 list of endangered battlefields are:

All About Civil War • History