LOS ANGELES, California (CNN) -- A crowd of about 10,000 came to Dodger Stadium on Saturday, but they weren't there for a baseball game. 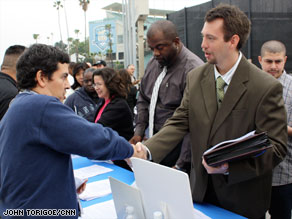 While the Dodgers were in Arizona for spring training, more than 80 employers set up employment booths in the parking lot just beyond the center field fence. To those who turned out, finding a job would be a home run.

Participating companies included Coca-Cola, Lowe's and Union Bank. And government agencies including the FBI, the Social Security Administration and the Army Corps of Engineers were there, too.

All had one thing in common: They were hiring. And that was music to the ears of 30-year-old Eric Clardy.

It has been a rough couple of years for Clardy. He was laid off from his job as a loan processor when the real estate market started to tank. Then, after finding work as a project manager for a plumbing company, layoffs struck again.

"It's kind of like, get the job now so you can pay your bills, then start towards the career that you really want," he said.

Clardy said his goal is to make contact with at least 10 potential employers a day via phone, letters and the Internet. Being unemployed is hard work, too.

Watch how Clardy goes about trying to find a job »

"It was a scramble," Clardy said. "I was selling insurance, doing temp jobs, going to job fairs."

The city of Los Angeles and the California Employment Development Department organized Saturday's event, which they said drew about 10,000 people.

Earlier this month, a two-day job fair to fill some 500 part-time jobs at the stadium during baseball season drew about 7,000 applicants.

California's unemployment rate is 10.1 percent, a full 2 percentage points higher than the national rate. The state's Employment Development office estimates that nearly a half-million state residents have lost their jobs in the past year.

"We are not seeing as many job opportunities as we saw a year ago," said Gloria Bratton Moore, who runs the state-funded Work Source job center in Los Angeles. Nonetheless, she said, "There are jobs available."

But at Dodger Stadium, it was clear that competition for those available jobs is stiff. Applicants were often stacked four and five people deep in front of employer tables, and there was little chance for most of the 10,000 job seekers to make much of an impression. But organizers worked hard to pump up any flagging spirits.

"Yes we can. Yes we can," Los Angeles School Board member Monica Garcia chanted over a loudspeaker.

State lawmaker Kevin deLeon told the crowd that they are among the nation's hardest-hit in this economic downturn, but he exhorted them to not give up.

"We will get out of this economic funk," he said. "We will recover soon. We've got to have hope."

Garcia and deLeon's comments echoed the campaign slogans of President Obama, who recently won approval of a nearly $800 billion economic stimulus package. Recruiters from the government agencies present at the job fair said that money will start creating jobs within the next few months.

The Army Corps of Engineers told applicants that it is hiring for a wide variety of positions, including those for engineers, heavy-equipment operators and environmental field workers. The Commerce Department is adding more than 1 million jobs in preparation of the 2010 census, and other federal agencies are hiring as well.

All of that was good news to Clardy, who left resumes and filled out applications at a number of the 80 booths cluttering the stadium's parking lot. But he remained realistic about this day's activities leading directly to a job.

"It seemed like a couple of years ago, the job fair was really your first interview," he said. "Now it doesn't seem like that. Some companies are not even taking resumes at the job fairs anymore."

All About Layoffs and Downsizing • California • National Economy • Jobs and Labor