(CNN) -- White House officials and some members of Congress reacted strongly Sunday to news that insurance giant AIG had intended to pay out $165 million in bonuses and compensation. The company has received at least $170 billion in federal bailout money. 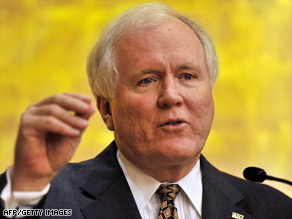 In a letter to the White House, AIG Chairman Edward Liddy, shown here in December, vows to curb bonuses.

Under pressure from the Treasury, AIG scaled back the bonus plans and pledged to reduce 2009 bonuses -- or "retention payments" -- by at least 30 percent. That did little to temper outrage at the initial plan, however.

"I write to ask why any bonuses would be legally required, given the company's abysmal performance," says Feingold, D-Wisconsin.

Feingold asked whether the bonuses could be canceled or recouped from recipients, and whether the administration will sue AIG executives for breaching their duties to shareholders

"There are a lot of terrible things that have happened in the last 18 months, but what's happened at AIG is the most outrageous," Lawrence Summers, head of the National Economic Council, told ABC's "This Week."

"What that company did, the way it was not regulated, the way no one was watching, what's proved necessary, it is outrageous."

"He stepped in and berated them, got them to reduce the bonuses following every legal means he has to do this," Goolsbee said.

In a letter to Geithner, obtained Saturday by CNN, AIG Chairman and CEO Edward Liddy said his company was taking steps to limit compensation in AIG Financial Products -- the British-based unit responsible for issuing the risky credit default swaps that have brought the company to the brink of collapse. The default swaps amount to insurance against losses from bad loans, which have increased dramatically since the U.S. housing boom peaked.

In the letter to Geithner, Liddy said the unit's 25 highest-paid contract employees will reduce their salaries to $1 this year and all other officers in the unit will reduce their salaries by 10 percent. Other "non-cash compensation" will be reduced or eliminated. But he told Geithner that some bonus payments are binding legal obligations of the company, and "there are serious legal, as well as business consequences for not paying."

Rep. Barney Frank, the chairman of the House Financial Services Committee, told Fox that bailout recipients should have to follow stricter compensation rules, and said Congress should look into whether the bonuses are "legally recoverable."

"We can't just violate legal obligations, I understand that," the Massachusetts Democrat said. "But I do want to find out at what point these legal obligations were incurred. Who said, and at what point, 'We're going to give these bonuses no matter what?' And I do think it's inappropriate for those people to stay in power at that company."

Frank said that if banks complain that the Obama administration has made things too tough, "They can give the money back. We made that easy."

Goolsbee said AIG was following "a policy that's really not sensible, is obviously going to ignite the ire of millions of people."

"We've done exactly what we can do to prevent this kind of thing from happening again," Goolsbee said. Summers told ABC that the administration was taking "every legal step possible to limit those bonuses."

Sen. Bob Corker, R-Tennessee, told "Fox News Sunday" he believes it's important to know whether the bonuses are actually commission payments for products sold by brokers, saying he would withhold judgment until that is clarified.

However, "I do think that these entities that are receiving government money, our money, I do think they have to play by a different set of rules," Corker said. Hopefully, those different rules will discourage companies from accepting bailout funds, he said.

Liddy, however, makes clear in the letter that he took steps to limit his employees' compensation with trepidation. He said the company will have trouble attracting and retaining "the best and the brightest ... if employees believe that their compensation is subject to continued and arbitrary adjustment by the U.S. Treasury."

AIG lost a record $62 billion in the fourth quarter of 2008. It has more than 74 million insurance policies issued in 130 countries around the world.