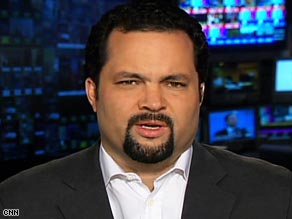 NAACP CEO Benjamin Jealous says, "We are not seeking damages; we just want them to fix the problem."

"We have targeted these banks because we have gone through what we can get our hands on, and it seems like there's a real problem here," NAACP CEO Benjamin Jealous told CNN.

Jealous said the group wants "transparency." "We want to see the books," he added. "We are not seeking damages; we just want them to fix the problem."

Both companies denied the allegations.

HSBC spokeswoman Kate Durham said the company does not comment on litigation, but she said, "We stand by our lending practices."

In a statement, Wells Fargo spokeswoman Melissa Murray said, "The NAACP's allegations are totally unfounded and reckless. We have never tolerated, and will never tolerate, discrimination in any way, shape or form in any of our business practices, products or services."

She added that the company has been "working with the NAACP for the past two years to develop a partnership that would benefit the NAACP, its constituents and our communities, so we are dismayed that the NAACP has chosen to abandon that constructive dialogue in order to pursue this litigation."

Under subprime lending, people who don't qualify for lower interest rates can borrow money at higher rates. The NAACP argues that the companies gave subprime rates to African-Americans who qualified for better rates and gave better rates to white customers with similar credit histories.

"These statistical disparities are not mere happenstance, but instead result from the systematic and predatory targeting of African-Americans, as well as facially neutral lending policies and practices that have a disparate adverse impact on African-Americans," said the lawsuits, which were filed in U.S. District Court for the Central District of California.

The NAACP has launched similar suits against numerous other lenders. In its statement Friday, the nation's oldest civil rights group said, "One lender has already entered into a preliminary settlement agreement with the NAACP, and a number of other lenders are engaged in similar discussions."

All About NAACP • Wells Fargo & Company