(CNN) -- The United Nations is urging countries to invest in green jobs working with "sustainable forest management" to address the growing problem of unemployment worldwide. 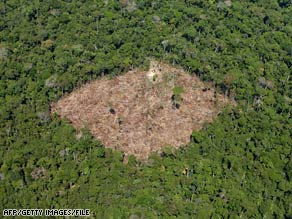 A deforested area appears in a rain forest in Brazil's Para state in October.

At least 10 million such jobs could be created, the U.N. Food and Agriculture Organization will say in a report to be released this week.

The report does not mention any countries but is aimed at "mainly regions with substantial rural unemployment and degraded land areas," said C.T.S. Nair, chief economist in the U.N. Forestry Department and one of the authors of the report.

The United Nations said it already is seeing indications that some countries -- such as the United States, India and South Korea -- are interested and taking action to invest in sustainable forest management by making it part of their economic stimulus plans.

Sustainable forestry aims to prevent depletion of forests by managing them and making sure their use does not interfere with natural benefits or the local environment.

For example, in forests where wood is being removed, the United Nations is suggesting that people be hired to monitor and manage how much wood is taken out to ensure the forest does not become depleted and can grow back fully. Managers also would make sure the wood harvest wouldn't affect biodiversity and the water supply.

The report will be discussed and analyzed next week at the U.N. Committee on Forestry meeting in Rome, Italy. The Food and Agriculture Organization has designated next week as World Forest Week.

All About United Nations • Nature and the Environment • Africa