For one man, foreclosure is a shot at his housing dream 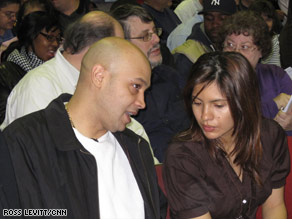 Victor Guavares discusses his plans with his wife, Yajaira, to bid on a foreclosure at an auction Sunday in New York.

Banks and other lenders were unloading foreclosed houses, and they were selling at 50 percent to 60 percent below their highest values.

Guevares figured it was now or never for his family of four.

"I just have a feeling that in six to nine months, we're going to start to see a resurgence in the market. So, I think now is the time for us to get into it, if we can," he told CNN.

About 2,000 potential buyers went to Sunday's auction, ready to vie for 375 foreclosed properties at what they hoped would be bargain prices.

The auction drew about 1,400 people, twice as large as the crowd last year, when the California-based Real Estate Disposition Corporation held its first foreclosure auction in New York City, according to The New York Times.

Guevares did his homework before the event, checking out three foreclosed houses listed in a catalog. But he really had his heart set on one of them, which is not far from his father's home.

"I'm nervous because I want the house so bad," Guevares said. "I really, really want this property."

It's a two-story, three-bedroom house in the Queens neighborhood of Woodhaven. Less than a year ago, it was listed at $527,000. Now, the auction house was asking for an opening bid of $89,000.

Guevares said he'd never considered that someone else's misfortune may be his ticket to home ownership.

"I could empathize, I could sense the dread it would cause families. [But] you should have seen where we started ... a studio apartment with a mattress on the floor," he said. "This [home up for auction] would be my dream house."

It hasn't been easy to sock away enough money to get this far.

The Brooklyn native's college career was interrupted when he was shot the summer after his freshman year. After recovering, he didn't return to the school, working instead to pay off the loans he'd received. Eventually, he went to another school and earned an associate degree in telecommunications.

For the past few years, Guevares has been saving for a down payment while working for a chemical company.

At Sunday's auction, he tried to keep the knots in his stomach in check.

It was a madhouse at the convention center, where speakers blasted bids throughout the room. Finally, after more than four hours, Guevares' dream house came up for bids.

An auctioneer barked out bids and tuxedoed assistants ran up and down the aisle. Guevares made the opening bid, but in a heartbeat, at least two other competitors jumped in.

Guevares looked shell-shocked, but he ended up with the winning bid: $230,000.

Although he put down about $12,000 in cash, he's not the home's proud owner just yet. He might have to bring the house up to code before he can apply for a loan. He has 30 days to seal the deal, and the clock is ticking.

Still, he said he can "see the light at the end of the tunnel."

"It's just wonderful. I feel I'm a part of the American experience now," Guevares said.

Before the auction, his 8-year-old son, Devon, had a chance to look over his possible new home and what would be his second floor bedroom and his own back yard.