(CNN) -- Target Corp. this month will open 27 new stores employing a total of more than 4,300 people, the company said. 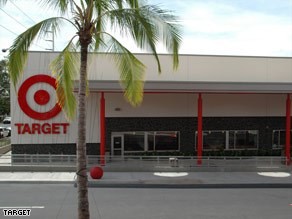 The stores' openings will come just weeks after the retailer cut 600 people from its headquarters staff amid what it called weaker-than-expected sales.

The retailer will hold grand openings for the 21 general merchandise stores and six full-grocery SuperTarget stores on Sunday. The new sites include the company's first two stores in Hawaii.

Each general merchandise store employs 150 to 250 people, and each SuperTarget has 200 to 300 workers, the company said.

In late January, Minnesota-based Target cut its headquarters staff by 9 percent and eliminated 400 open positions. The company, citing difficult economic conditions and sales that didn't meet expectations, also said it would soon close an Arkansas distribution center that employs 500 people and would cut back on planned new-store openings.

"We are clearly operating in an unprecedented economic environment that requires us to make some extremely difficult decisions to ensure Target remains competitive over the long term," Gregg Steinhafel, Target president and CEO, said in a news release that month.

Retailers in the United States took a hit last year as a weak economy weighed on consumer spending. Retail sales fell six straight months until January, when sales rose 1 percent, according to the Commerce Department. However, retail experts said they were skeptical a rebound had taken hold.

Still, two other retailers also announced plans to expand. Kohl's announced last month that it intends to open 55 stores in 2009, and Dollar General in February said it is looking to open more than 400 stores.

The new locations will increase the number of Target stores to 1,699, the company said.

CNNMoney.com's Parija B. Kavilanz contributed to this report.

All About Target Corporation • National Economy