(CNN) -- The Marine Corps has sacked four top officers of a California-based fighter squadron over the December crash of a fighter jet that slammed into a San Diego neighborhood, the service announced Tuesday. 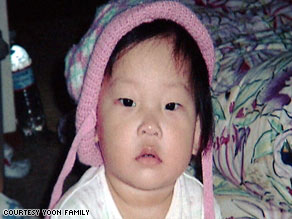 Grace Yoon, 15 months, was killed after a military jet crashed into her home.

Deferred maintenance and faulty decisions by the pilot and squadron members with whom he was communicating on the ground contributed to the crash, a Marine Corps investigation concluded.

The commander of the squadron involved, its top maintenance officer and two others have been relieved of duty as a result of the investigation, and nine other Marines have received other disciplinary action, Maj. Gen. Randolph Alles said.

The jet crashed in the University City neighborhood of San Diego, about three miles short of the Miramar airfield. Two adults and two small children from a Korean immigrant family were killed when the jet slammed into their house.

Watch what pilot said as plane had trouble »

The F/A-18 Hornet crashed after "a succession of emergencies" that began with oil-pressure problems in its right engine during a flight off the Southern California coast, said Marine Col. John Rupp. That left the jet relying on its other engine, which previously had been giving mechanics electronic indications of a problem with its fuel-flow system, Rupp said.

Learn more about the jet »

Maintenance rules don't require immediate repairs for the problem, he said, but the squadron flew the jet 146 times before it eventually crashed because its left engine was starved for fuel.

"The end result was that the squadron elected to fly an aircraft that had a degraded fuel system on the left side of the aircraft," Rupp said. "This is a critical point, and this was collectively questionable judgment on the part of the squadron's maintenance department."

The investigation criticized the pilot, who was being trained on the F/A-18, for not consulting a pocket checklist that outlined emergency procedures. While controllers aboard the aircraft carrier that launched the jet urged the pilot to land at a nearby Navy airfield at North Island, squadron officers relied on "incorrect assumptions and inaccurate data" to guide him back to the plane's base at the Miramar Marine Corps Air Station.

"No one in the ready room stated or understood the severity of the low fuel emergency at this time," Rupp said. "This is a critical moment, and this is collectively bad decision-making by the duty officer, by the operations officer and by the squadron's commanding officer."

The pilot waited "until the last possible moment" to eject from the plane, bailing out at an altitude of just 400 feet, and attempted to steer away from homes on the ground before the crash, Rupp said.

The pilot, whose name has not been released, is grounded pending further review, which Marine officers said was routine. Alles said the officer was an "above-average" pilot who "just made a poor decision."

Dong Yun Yoon lost his wife, children and mother-in-law in the crash and another unoccupied house also was destroyed.

Yoon said the victims were his daughter Rachel, who was born less than two months before the accident; his 15-month-old daughter Grace; his wife, Young Mi Yoon, 36; and her 60-year-old mother, Suk Im Kim, who he said had come to the United States from Korea recently to help take care of the children.

In an emotional press conference in December, Yoon said he did not blame the pilot and urged the public to pray for him.

"I don't blame him. I don't have any hard feelings. I know he did everything he could," Yoon said at the time.

"Please pray for him not to suffer from this accident," Yoon said as he fought for composure. "He is one of our treasures for the country."