LOS ANGELES, California (CNN) -- The long lines of parked cars outside Dodger Stadium could have been the typical sign of an afternoon game featuring the Boys in Blue. But the massive crowd of cars at the stadium during the weekend had more to do with income than infield plays. 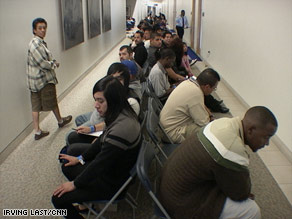 Applicants wait their turn for an interview at the Dodger Stadium job fair on Saturday.

A two-day job fair to fill some 500 part-time jobs during the baseball season, from stadium security to hawking beer during the games, attracted nearly 7,000 applicants.

While many are no doubt fans of the Dodgers and would enjoy spending summer evenings at the ballpark, all were eager to convert their summer time into cash.

With the team in Glendale, Arizona, for spring training, the stadium became a human resources arena for six hours both Saturday and Sunday during the 2009 Dodgertown Job Fair.

Dodgers officials said they had expected as many as 10,000 applicants to show up during the weekend, based on similar job fairs held by other teams across the country as unemployment climbs and economic conditions worsen for many people.

Despite a lower turnout, this year's crowd was "significantly more" than similar job fairs in previous years, team officials said, although no numbers for previous years were released.

Joe Walsh, vice president of human resources for the Dodgers, said he wasn't surprised by the uptick in applicant numbers, with the downturn in the economy.

"The expectations (for the job fair) are much higher based on what we see in the unemployment rate," Walsh said.

The jobs to be filled from the fair pay from $9.50 to $17 an hour, and they drew applicants from a broad spectrum of ages and backgrounds.

Bob Reider, 68, came looking for a beer-cart job to supplement his Social Security check. For Reider, the money would help pay for tuition and books for his two youngest children in their final years of college.

"This is supposed to be the golden years, whatever that means," Reider said, adding, "I am in excellent health, and I don't mind working and I got a good cause. So it all fits."

It's the economic downturn, Reider said, that has caused him to look for work in his senior years.

"It is very difficult to live on what we have today," he declared, noting the difficulty of the job search. "It's almost impossible for me to find a reasonable daytime job at my age."

Security job applicant Jose Soto, an immigrant from the Dominican Republic, made it clear he would be willing -- indeed, eager -- to work at all 81 of the team's home games.

"This is a great organization. Everyone would like to come to L.A. and work for the Dodgers," Soto said.

On both days, applicants were handed individual, numbered wristbands at the entrance to the stadium. They sat and waited, listening for their number to be called.

Numbers were called in groups, and the groups filed to the suite level, where they filled out applications, then sat down for a preliminary interview that could last a few seconds or a few minutes, depending upon an applicant's experience and interest in a job.

By many assessments, anyone looking for summer work will have a tough time this year. In January, the unemployment rate in California rose to 10.1 percent.

At the Dodgertown Job Fair, though, spirits were high.

Reider, for example, got a boost of confidence after being told to expect a call back in the next week.

As the thousands of applicants waited, some talked about the team that will take to the field here in a few weeks.

One job they talked about was filling the Dodgers' high-profile opening in left field. The position, and a $45-million, two-year contract, was offered to slugger Manny Ramirez, but so far, no deal.

At the job fair, applicant and Dodgers fan Jose Soto had some simple advice for Ramirez: