(CNN) -- It's a tough time for businesses, but one entrepreneur may have found the recipe for success. 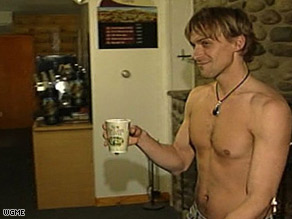 In a town with fewer than 4,500 residents, the topless coffee shop is booming with business. Paul Crabtree, the owner's brother, describes business so far as "fantastic."

"It's just been crowds mobbing in," he said.

Donald Crabtree faced initial opposition to his plan, but he won the right to go ahead in a planning board hearing last week. Many local residents were irate over the idea of combining coffee and nudity. Crabtree, however, saw a profitable business venture.

"I know what people want," he said. "People like nudity, and coffee is profitable. Sure, I'd start a coffee shop, but I'd be out of work in a week."

Crabtree hired 10 women and five men under stringent requirements, including friendliness and, what he considered most important, that the wait staff "treat everyone equally." Watch townspeople, employees talk about coffee shop

"We didn't hire '10s,' " he said, referring to appearance. "We hired everyone from skinny to big-boned women."

Of the 15 selected, most had been laid off from other jobs in the past few months.

Elvis Thompson of Brunswick, for example, was a line cook at a restaurant before he lost his job. "They couldn't afford me anymore," he said.

He said he doesn't mind fielding interesting requests from customers.

"An 80-year-old woman told me she wanted to see me in spandex," Thompson said. "I just feel really lucky to have a job. I need the money so I can pay my rent."

Ginni Labree from Palermo, Maine, said she applied to several restaurants before being hired at the Grand View. All the restaurants declined to hire her because of her lack of experience.

The coffee shop jobs are paying off. One waitress received a $100 tip for a cup of coffee, and most of the wait staff make about $30 a table.

Although the topless coffee shop has been open less than a week, Crabtree said he is already seeing regulars. Customers include a variety of individuals, but mainly couples and females.

He also sees his new business venture as a temporary fix for customers struggling through tough economic times.

"The economy is so bad," Crabtree said, "Everyone's losing their homes, their ties, everything they own. People leave here happy and can't wait to come back. It's nice to see people smile again."

All About National Economy • Maine