(CNN) -- After nearly 150 years in business, the Rocky Mountain News published its final edition Friday, the victim of a bad economy and the Internet generation. 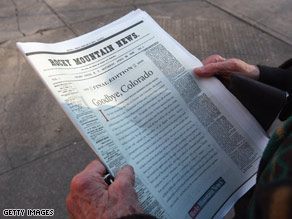 "It is with great sadness that we say goodbye to you today. Our time chronicling the life of Denver and Colorado, the nation and the world, is over."

The Rocky Mountain News' owner, E.W. Scripps Co., made the announcement to the newsroom at noon Thursday, ending three months of speculation and drama over its fate. The News had been put up for sale in December.

The Rocky Mountain News was the latest victim in an era of shutdowns, layoffs and cutbacks plaguing the newspaper industry.

Newspapers across the country are under pressure as readership declines, along with advertising revenue, while more and more Americans get their information online.

"All newspapers are under great pressure. They'll survive, but they'll survive in different forms, their costs base will have to be dramatically lowered," said Mort Zuckerman, publisher of the New York Daily News, which has the seventh highest circulation in the country.

The dramatic decline in advertising dollars in a brutal economy has forced newspapers to cut costs by firing cartoonists, columnists and others, leaving them searching for jobs in a struggling industry.

Pia Catton lost her job as arts editor of the New York Sun five months ago, when the newspaper closed. She has taken a short-term job editing a book, but she thinks she may need to look at different careers soon.

The Rocky Mountain News had more than 200 editorial employees, according to the Columbia Journalism Review's Web site.

Rich Boehne, chief executive officer of Scripps, told employees the newspaper was the victim of a terrible economy, an upheaval in the newspaper industry and multimillion-dollar annual losses.

The News has been in a joint operating agreement with The Denver Post since 2001, which combined the papers' business operations in an effort to save money, but left the editorial departments separate.

The News' closure leaves Denver with one major newspaper, like most American cities.

"We've been, sort of, hanging on the edge for so long," said Mel Pompanio, a presentation editor for the paper. "What a huge loss for Colorado today."

This week, the San Francisco Chronicle announced it was in danger of being sold or closed if it doesn't stop losing millions. Officials from the Hearst Corp., owners of the Chronicle, said the paper lost $50 million in 2008 and is on pace to lose more this year.

"It's difficult. It's hard," Lynn Bartels, a political reporter and 26-year employee for Scripps, said of the News' closing. "I haven't returned any phone calls yet, because I don't need to be reporting and crying at the same time. I've done that enough."

Long faces dominated the newsroom in video posted on the paper's Web site. A few sobs could be heard, too, as the announcement of the closing began to sink in among employees.

"I could say stupid things like 'I know how you feel.' I don't," Boehne said. "We are just deeply sorry. I hope you will accept that."

All About The E.W. Scripps Company • Denver • The Denver Post