Focus on the Family's James Dobson steps down

(CNN) -- James Dobson, the influential evangelical leader of the Christian ministry Focus on the Family, has stepped down as board chairman, he announced Friday. 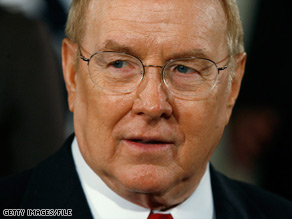 James Dobson is expected to stay in his public role as an advocate for socially conservative issues.

During a meeting with employees, Dobson, 72, said the move means he will no longer be involved with the administrative side of the organization, according to spokesman Gary Schneeberger.

But Dobson's public role isn't expected to change. He'll still appear on his daily radio broadcast and as an advocate for socially conservative issues, Schneeberger said.

"There won't be a whole lot of difference," the spokesman said. "You'll still hear him on the radio. You'll still see him on the networks like CNN with Larry King.

"He said to the staff today, 'I've got more to say -- I'm not ready to stop fighting for the things I've fought for for the past 32 years.' "

Founded in 1977, Focus on the Family is a nonprofit organization devoted to what it considers Christian family values, with Dobson's daily program geared largely toward advice on parenting from a religious perspective.

But in recent years the ministry, like Dobson himself, has become more active in promoting social and political views.

Last year, Dobson caused a huge political stir when he announced he "cannot and will not" vote for Republican nominee Sen. John McCain. He later changed his tune, after McCain's pick of Alaska Gov. Sarah Palin as his running mate, calling her selection "one of the most exciting days of my life," on the syndicated Dennis Prager Show.

Dobson has gained widespread attention again with his criticisms of a 2006 speech by now-President Barack Obama on his religious views. He accused Obama of "deliberately distorting the traditional understanding of the Bible to fit his own worldview, his own confused theology."

That led to a backlash. A group of ministers started an online petition, James Dobson Doesn't Speak for Me, that drew more than 12,000 signatures. Kirbyjon Caldwell, pastor of Houston, Texas' Windsor Village United Methodist Church, led that effort.

"Dr. Dobson has made a tremendous contribution to the spiritual and social fiber of this country. I've always said that and will continue to say it although, obviously, we have not always agreed," Caldwell said Friday.

"The fabric of the evangelical community here in America is very strong. One or two disagreements here and there are surely not going to cause the community to tear apart at the fringes."

Dobson has spoken out loudly against abortion rights and gay marriage and even weighed in on the Harry Potter fantasy series, with a statement on the group's Web site denouncing the books' "trend toward witchcraft and New Age ideology."

"He built his media empire around, sort of, parenting and family issues and he has since used his audience and his media presence to push a political agenda," said Peter Montgomery, a senior fellow with the liberal People for the American Way, which advocates, among other things, for the separation of church and state.

"In the last several election cycles, he's constantly complained that the Republican Party isn't far enough to the right and sort of has a habit of saying he's going to take his followers and walk if they don't do more to push his agenda," Montgomery said.

Focus on the Family says its broadcasts reach more than 220 million people in 155 countries. Its newsletter, in which Dobson will continue to write, goes to 1.6 million people.

Dobson's announcement that he and his wife, National Day of Prayer Chairwoman Shirley Dobson, are stepping down from the board of directors comes six years after he resigned as the ministry's executive director.

"One of the common errors of founder-presidents is to hold the reins of leadership too long, thereby preventing the next generation from being prepared for executive authority ...," Dobson said in a written release. "Though letting go is difficult after three decades of intensive labor, it is the wise thing to do."

Montgomery, whose group has been critical of what it calls an "assault on Americans' liberties" by Focus on the Family, said it's unclear how influential the group will be when Dobson is no longer its public face. While Dobson is the personality that drives the ministry, Focus on the Family has a vast communication and fundraising infrastructure that could continue to make it a player in social and political issues for years to come, he said.

In the meantime, Montgomery said, he doesn't expect Dobson's influence to wane because of the behind-the-scenes changes.

All About Focus on the Family Action Inc. • James Dobson • Sarah Palin • People for the American Way