NEW YORK (CNN) -- Leaders of the NAACP on Saturday called for the firing of the New York Post cartoonist whose drawing lampooning the federal stimulus bill has drawn charges that it's racist and encourages violence toward President Obama. 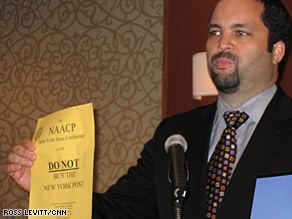 Speaking at the civil rights group's annual meeting in New York, NAACP President Benjamin Todd Jealous said that if Sean Delonas is not fired, the group will call for protests of the paper and Fox television affiliates, which are owned by Post parent company News Corp.

"There is consensus that if the Post does not ... get rid of the journalists who are responsible for this bit of hate speech seeing the light of day, that we will move this from a local, regional issue to a very national issue," Jealous said.

The group also called for the cartoonist's editor to be fired.

Many critics said the cartoon played on historically racist images by appearing to compare Obama, the nation's first black president, to a chimpanzee that had been shot by police officers.

The cartoon references the mauling of a Connecticut woman by a chimpanzee who was later shot and killed by police.

In its caption, one of the officers says, "They'll have to find someone else to write the next stimulus bill."

Obama had signed the bill the day before the cartoon ran.

On its Web site Thursday, the paper offered a qualified apology, saying it was "most certainly not our intent" to express racism, but also accusing some of jumping at a chance to attack a paper they already disliked.

Watch reaction to the Post's apology »

"To them, no apology is due," the paper wrote. "Sometimes a cartoon is just a cartoon -- even if the opportunists seek to make it something else."

"This is tastelessness taken to the extreme," he said. "For the publication to suggest the only people who object to it are constant critics of the New York Post is beyond ridiculous.

"This was an invitation to assassination of the president of the United States and anyone who was not offended by it doesn't have any sensibilities."