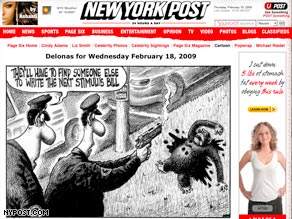 Reactions are as varied as they are strong to Tuesday's New York Post cartoon that depicted the police shooting of a chimpanzee. Two police officers, one with a smoking gun, are near the chimp's bullet-pierced body. "They'll have to find someone else to write the next stimulus bill," one officer says.

The Post's Sean Delonas used a typical editorial cartoon trope of linking two current news stories: the shooting of a chimp after it mauled a Connecticut woman and President Obama's signing of the stimulus bill.

But soon after the issue hit newsstands, the Rev. Al Sharpton, and other black opinion makers such as CNN's Roland Martin, blasted the cartoon as an attack on Obama's skin color and African-Americans in general.

"Being that the stimulus bill has been the first legislative victory of President Barack Obama and has become synonymous with him, it is not a reach to wonder: Are they inferring that a monkey wrote the last bill?" Sharpton said.

Jelani Cobb, a Spelman College history professor and the author of a forthcoming book about Obama, told CNN that the cartoon offended on many levels. iReport.com: Chimp cartoon 'very, very wrong'

He winced at the cartoon's gun violence as a stoker to the nervousness some feel about the safety of a black president in a historically racist country.

"When I looked at it, there was no getting around the implications of it," Cobb said. "Clearly anyone with an iota of sense knows the close association of black people and the primate imagery."

Dozens of cartoonists weighed in on dailycartoonist.com. Some said it was a simpleton move to use the tired metaphor of a monkey to make fun of something -- no matter what it was. One poster wrote, "Wha...?" pointing out that Obama didn't write the stimulus package; lawmakers did.

On the cartoon "danger scale" of 1 to 10, the chimp cartoon scored a 9, Dilbert creator Scott Adams told CNN.

Adams liked the cartoon, but judging its overall worthiness is difficult, a gauge best measured by an audience, not the cartoonist, he said.

"Any cartoon has to be a little bit dangerous, and he's definitely achieved that," he said. "You have to perceive that the cartoonist is in personal danger or there's something dangerous about it, that at the cartoonist's next cocktail party, half of the people there are going to want to poison his drink."

Just like George Carlin's seven dirty words, there are also no-no's for cartoons, Adams said. "He's got everything you shouldn't have," he said. "Gunfire, that's the one thing you cannot get away with. And then he's got violence against animals, also a pretty big no."

New York Post editor Col Allan referred calls to a public relations representative, who sent CNN.com this statement: "The cartoon is a clear parody of a current news event, to wit the shooting of a violent chimpanzee in Connecticut. It broadly mocks Washington's efforts to revive the economy. Again, Al Sharpton reveals himself as nothing more than a publicity opportunist."

Delonas was not giving interviews, the PR rep told CNN.

If there is any apology due, it shouldn't come from the cartoonist, insisted Ted Rall, the president of the Association of American Editorial Cartoonists, whose cartoons run in 100 publications across the United States.

An editor should object if there is a strong possibility that a cartoon will not resonate the way the cartoonist wanted, he said. Cartoonists have to be free to be creative, to not edit themselves during the drawing process.

"He was trying trying to jam two stories together, and unfortunately, this is what a lot of lame editors like," Rall said. "The comparison he had in mind: The guy who wrote the package wasn't Obama; it was a bunch of white economic advisers, and he [Delonas] wasn't thinking about Obama."

The Post cartoonist, he added, has the misfortune of working in a business that, over the past decade, has become a graveyard of gag jokes. A former editor once told Rall that satire in cartooning died after September 11.

"I have to wonder about the competence of his editors," Rall continued. "It goes with the 'make it shorter and dumber' mentality that's happening in print."

But later Thursday the New York Post apologized in a statement on its Web site, although they also defended its action and blasted some detractors.

The Post said the cartoon was meant to mock what it called an "ineptly written" stimulus bill. "But it has been taken as something else -- as a depiction of President Obama, as a thinly veiled expression of racism," reads the statement. "This most certainly was not its intent; to those who were offended by the image, we apologize."

But the statement immediately swerves to fire back at some of the image's critics. "However, there are some in the media and in public life who have had differences with The Post in the past -- and they see the incident as an opportunity for payback," the statement says. "To them, no apology is due. Sometimes a cartoon is just a cartoon -- even as the opportunists seek to make it something else."

Cartoonist John Auchter of the Grand Rapids Business Journal in Michigan said Delonas had to expect people to be offended.

"The racial connotation of what he drew, it's really silly that either he or his editors couldn't anticipate that [reaction]," Auchter said. "When I think about all the things that are thrown around here with the accusations of being racist ... that is one of the things as a cartoonist you have to be aware of -- what you're doing and that you know things are going to be taken that way. You are the first-line editor."

Syndicated political cartoonist Chip Bok didn't find the Post cartoon racist, but he said it probably was in bad taste.

"A woman was terribly mauled and almost killed," he said. "That's really the only grounds by which [my editors] would throw out a cartoon. When it involves somebody's life like that, I would tend to stay away from it."

Bok knows a little about what it feels like to create a polarizing cartoon. In 2006, around the time of the Danish Mohammed cartoon controversy, the Akron Beacon Journal published a cartoon he drew showing a blurred picture of Mohammed on CNN.

The cartoonist had been watching the network cover the story about Muslim anger over the Danish cartoons, which showed the prophet with a bomb crafted out of his turban. Bok was upset that CNN had chosen to blur the cartoon in its coverage.

The cartoonist immediately drew his cartoon, which showed a couple watching TV and saying, "Well, no wonder Muslims are upset. Muhammad looks like he's on acid."

"I was inundated with e-mail, the paper was picketed," he said. "There was quite a reaction."