Postal service hits back at criticism of postmaster's pay

(CNN) -- Postmaster General John E. Potter has come under criticism for his total 2008 compensation of nearly $800,000, but the agency's board of governors says the pay is less than what leaders of several other independent government agencies receive. 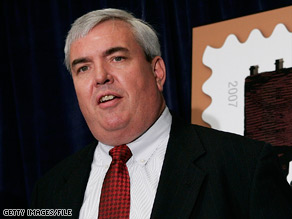 Postmaster General John Potter isn't paid as much as leaders of some other independent government agencies.

And the amount is far below that given to CEOs in the private sector, even though compensation and benefit packages for postal service officers are required by law to be comparable to those given to private-sector employees doing similar work, the board of governors says.

"That's a difficult standard to achieve given the compensation restraints within the federal sector," said Carolyn Lewis Gallagher, the chairman of the agency's board of governors.

She added that the postal service, with $75 billion in revenues and nearly 700,000 employees, compares with Fortune 100 companies.

Potter received a salary of $263,575 in 2008. His total compensation of nearly $800,000 included deferred earnings toward his retirement plan.

Compensation and benefit packages for officers of the postal service are governed by Congress and not funded by taxpayers.

"Even in these difficult times, the postmaster general continues to exhibit visionary leadership, effecting billions of dollars in cost reductions," she said.

Critics have tried to paint Potter's compensation as excessive, given that he had recently appeared before Congress warning that, with a $2.8 billion loss in 2008, the postal service may need to reduce its congressionally mandated six-days-a-week delivery schedule. iReport.com: Mail five days a week?

"Apparently compensating executives well is still a possibility at the post office," Pete Sepp of the National Taxpayers Union told CNN on Tuesday. "And despite all the delivery problems they may have, despite the deficits they may have, executive compensation is still nice, fat and round."

Other independent government agencies pay their executives much more, however.

Fannie Mae and FedEx are among Forbes' top 100 firms.

A new postal law in 2006, Gallagher said, gave the postal service more flexibility to devise a compensation plan that didn't focus on salary. As a result, she said, the agency adjusted salaries and benefits packages, including performance-based initiatives, that became effective in 2008.

Potter saw his civil service pension fund rise by $381,496 in 2008, and he received a $135,041 incentive pay that will be deferred to his retirement, according to a filing released December 10.

Civil service pension rules are applied to all federal employees to calculate compensation, postal service spokesman Gerald McKiernan said. The calculation is based on salary and years of service, he said.

Sepp compared Potter's earnings to "Detroit auto executives flying to Washington in a fancy jet to ask for tax dollars" and said he "would not be surprised" if the postal service asked for a Wall Street-like bailout.

Automakers General Motors and Chrysler on Tuesday asked Congress for another $21.6 billion to keep them out of bankruptcy. They plan to cut 50,000 jobs between them by the end of the year.

The price of a postage is increasing in May, going up from 42 cents to 44 cents.