WASHINGTON (CNN) -- The Nuclear Regulatory Commission voted Tuesday to require any future nuclear power plants to be designed to withstand strikes from commercial jetliners, addressing a possible terrorist scenario that has haunted some people since the September 11, 2001, attacks. 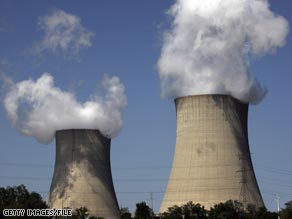 Under the rule, designs must protect both the reactor cores and pools of spent fuel.

Citizen activists have sought such a rule since the attacks, saying the consequences of an air assault would be catastrophic.

But industry officials and some commission members opposed the requirement, contending that the probability of any such attack is small and the costs of the protection would be prohibitive.

Consequently, the resulting rule contains language that is subject to interpretation, and debates over the steps nuclear power plant designers must take are likely.

Nonetheless, people on both sides of the debate declared victory Tuesday.

"This decision will go a long way toward protecting Americans from the horrific possibility that terrorists could target our nuclear plants with large aircraft," said Rep. Edward Markey, D-Massachusetts. "This ruling may have come later than I would have wanted, but it will certainly help keep our cities and towns safe from a catastrophic attack."

NRC Chairman Dale Klein, noting reservations he had with earlier drafts, called the final rule a "common-sense approach," saying it will result in a margin of safety far beyond that required to reasonably protect the public.

The rule requires applicants for new power reactors to conduct "realistic" analyses and incorporate design features that would prevent or mitigate damage from large commercial aircraft impact. Designers can either design plants that would withstand penetration if struck by a plane or they can design them to continue core cooling in the event of a strike that does penetrate the plant. Designs must protect both the reactor cores and pools of spent fuel.

But the rule does not specify how to accomplish those goals.

Nor does the rule affect existing nuclear plants. The NRC said it has already taken steps to improve security at existing nuclear power plants, including a February 2002 order requiring plants to develop and adopt strategies to cope with large fires and explosions from any cause.

Under the new rule, any design feature adopted solely to protect against large commercial aircraft is exempt from certain NRC regulations, including a requirement for redundancy.

Nuclear power plants must have backup systems to deal with other, more likely occurrences, such as large fires, floods, earthquakes, hurricanes and equipment malfunctions.