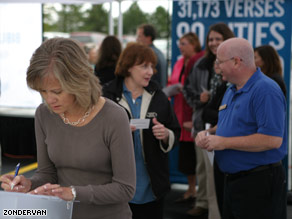 A woman writes a verse for the handwritten Bible as others wait their turn.

Those are the statistics being touted by Zondervan, the publisher behind a tour to produce a handwritten edition of the New International Version of the Bible -- America's NIV -- to celebrate the translation's 30th anniversary.

"We're basically halfway there," said Zondervan spokeswoman Tara Powers. A little more than 15,000 people had put pen to paper by mid-February. Each person gets to copy one verse of Scripture.

The tour, which began in September, will wrap in Dallas, Texas, on March 22 after reaching bookstores, churches, college campuses and special events in more than 40 states. The company even has its own RV, with the Web site name -- BibleAcrossAmerica.com -- boldly painted on the sides of the 42-foot motor home.

A typical stop lasts six to eight hours, according to Powers. Many people have waited hours in line to write a verse, while a few others have hopped airplanes or driven long distances to take part.

"The youngest child has been 4, and there have been people in their late 80s," Powers said. "We had a blind person who someone guided their hand as they wrote the verse."

On any given day, the Zondervan team works in four books of the Bible -- usually two Old Testament and two New Testament.

All the verses are written twice, and the originals will be bound, with one copy going to the Smithsonian Institution and the other being auctioned off for charity, Powers said.

Zondervan says it has sold 300 million copies since the NIV was first published in 1978, making it the most popular contemporary English-language translation.

Ultimately, the handwritten verses will be digitized and printed. Because of differences in the length of verses and styles of writing, an average page will hold 10 to 20 verses, Powers said.

"We were asking them to print, but some wrote in cursive anyway," Powers said, chuckling.

"People were devastated when they made a mistake," she added. Plenty of correction fluid and tape are kept on hand.

The process has been emotional for some and nerve-racking for others.

"People were struck by the importance of this when they sat down," according to Powers, who noticed light-hearted moods turn serious when it was time to become a scribe for the Bible.

"Some people expect to be able to pick a verse," Powers said, but "they're thrilled to be part of it, even if they can't pick the verse."

There have been exceptions. A man recently finagled his way into writing the shortest verse in the Bible, Powers said.

Noticing the verse John 11:35 was coming up, the man returned throughout the day and positioned himself in line so that he was able to pen the words "Jesus wept."

All About Smithsonian Institution