NEW YORK (CNN) -- A leading human rights official known for her expertise on the Rwandan genocide was traveling on the Newark-to-Buffalo flight that crashed into a house, killing all 49 people aboard the plane and one person on the ground. 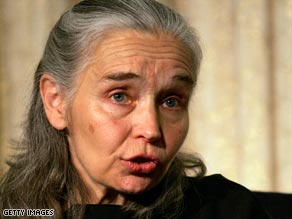 Alison Des Forges died in the crash of Flight 3407 outside Buffalo, New York, on Thursday night.

"Alison's loss is a devastating blow not only to Human Rights Watch but also to the people of Rwanda and the Great Lakes region," said Kenneth Roth, executive director of the humanitarian organization, said in a statement.

Des Forges, who lived in Buffalo, spent four years in Rwandadocumenting the 1994 genocide and had testified about that atrocity and the current situation in central Africa before U.N. and congressional panels, the group said.

Human Rights Watch, which is based in New York, said she was "best known for her award-winning account of the genocide, 'Leave None to Tell the Story.' "

"She was truly wonderful, the epitome of the human rights activist -- principled, dispassionate, committed to the truth and to using that truth to protect ordinary people.

"She was among the first to highlight the ethnic tensions that led to the genocide, and when it happened and the world stood by and watched, Alison did everything humanly possible to save people. Then she wrote the definitive account. There was no one who knew more and did more to document the genocide and to help bring the perpetrators to justice."

The group notes Des Forges' even-handedness in the Rwandan conflict. She insisted that the Rwandan Patriotic Front, the group that toppled the "genocidal regime," be held to account for its killings during and after the slaughter. She was banned from Rwanda last year after Human Rights Watch highlighted problems with its legal system.

"She never forgot about the crimes committed by the Rwandan government's forces, and that was unpopular, especially in the United States and in Britain," said Roth. "She was really a thorn in everyone's side, and that's a testament to her integrity and sense of principle and commitment to the truth."

She most recently was working on a report about killings in eastern Congo.

Human Rights Watch said Des Forges was born in Schenectady, New York, in 1942 and was a historian by training.

The statement issued Friday said she graduated from Radcliffe College in 1964 and in 1972 received her Ph.D. from Yale. She wrote her thesis on Rwanda. Her husband, Roger, is a professor of history and a China expert at the University of Buffalo. She is also survived by a daughter, a son, and three grandchildren.

All About Human Rights Watch • Rwanda • Republic of the Congo