WASHINGTON (CNN) -- A Pentagon review looking at allowing media coverage of the flag-draped coffins of fallen troops returning to the United States could be ready for the secretary of defense to look over within days, according to Pentagon spokesman Geoff Morrell. 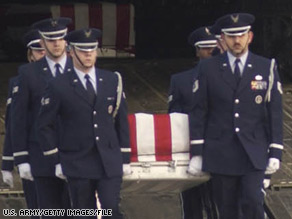 The Pentagon is reviewing a policy barring media from viewing coffins of soldiers killed in combat.

The review was ordered by Secretary Robert Gates after President Obama asked for more information on the Pentagon's longstanding policy of barring media from viewing the coffins as they come into Dover Air Force base in Delaware.

At a news conference Friday, Morrell said a good deal of input was required from a number of sources, including Pentagon offices representing family interests, the Defense Department's public affairs office and the various service branches.

"The secretary is looking to determine whether or not we can devise a process at Dover that is also able to best balance ... the desires of the families -- some families may not desire privacy -- as well as the American people," he said.

Pentagon officials say some families have said they want the return of their family members' remains to be private.

Advocates of opening the base to coverage say the unmarked, flag-draped coffins make it impossible to identify specific remains.

Pentagon officials, however, say it is not too hard these days to tell who is coming home.

"Thankfully, we are in a situation now where far fewer war dead are returning, from Iraq in particular," Morrell said. "And, for example, this week we had four soldiers killed up in north in Mosul, in an [improvised explosive device] attack. So in all likelihood, four caskets are going to be coming home from Iraq into Dover in the near future."

He said the secretary of defense has long been interested in looking at this policy and has been asking how other countries balance media coverage and family requests.

"The secretary is one who believes that perhaps we should be relooking at this," Morrell said. "Can we find a way to better balance an individual family's privacy concerns with the right of the American people to honor these fallen heroes, as well? And so we're in the process of working that out."