(CNN) -- The peanut processing company at the heart of a national salmonella outbreak, Peanut Corp. of America, filed for Chapter 7 bankruptcy liquidation in court Friday in Lynchburg, Virginia. 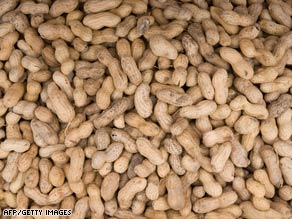 Peanut Corp. of America plants in Georgia and Texas came under scrutiny after the salmonella outbreak.

The documents were filed in U.S. Bankruptcy Court in the Western District of Virginia.

The bankruptcy papers were signed by Stewart Parnell, the president of Peanut Corp., who invoked his Fifth Amendment rights against self-incrimination in refusing to answer questions this week in a congressional hearing.

Bacteria found in the company's Blakely, Georgia, peanut processing plant have been blamed for more than 600 cases of salmonella, including nine deaths.

Watch how bankruptcy could affect case »

The Texas Health Department on Thursday ordered products from the company's plant in Plainview, Texas, to be recalled after discovering dead rodents, rodent excrement and bird feathers in the plant.

"The long and the short of it is that we kicked the tires on reorganizing the company, and, frankly, they're just in a position now where they can't even conduct business," said Andrew S. Goldstein, a lawyer for the company. "They can't operate at all, and this just seemed like the inevitable course."

In a written statement, Consumers Union said Friday's declaration shows that Congress needs to strengthen the Food and Drug Administration and hike the penalties it can impose.

"It is unacceptable for corporations to put consumers' health at risk and then simply declare bankruptcy and go out of business when they get caught," said Jean Halloran, director of food policy initiatives at Consumers Union, publisher of Consumer Reports.

"PCA's declaration of bankruptcy will, among other things, shield it from liability suits filed by consumers who became sick or whose loved ones died as a result of eating PCA's peanut products," she said.