ATLANTA, Georgia (CNN) -- Wendell Lawing's eyes light up as the 88-year-old man talks about his last flight in a B-17 bomber. 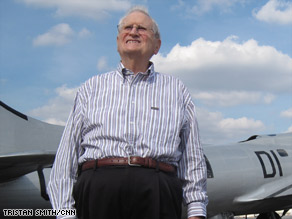 Wendell Lawing, 88, recently flew on a B-17 for the first time since World War II.

"We were going to Berlin, and we were flying around 20,000 feet. Suddenly, Me 109s headed out of the clouds," said the Atlanta native, referring to Germany's Messerschmitt fighter aircraft.

"We had a big fight, a running fight, and I personally saw my waist gunner shoot down one of those Me 109s right outside the window."

Seconds later, his bomber was struck in the plane's radio room. Lawing, who was the radio operator, already had moved farther back in the plane.

"I was back at the waist gun. Otherwise, I wouldn't be here today. We were set afire, and I was told to bail out, and I bailed out."

The Liberty Belle, a restored World War II-era B-17 like the one Lawing flew in, starts a nationwide tour this weekend in Atlanta. Its mission is to remind Americans of the sacrifices made by their fathers and grandfathers over the skies of Europe. It's also sure to spark the memories of servicemen who flew in them.

Lawing's plane went down on the outskirts of Berlin in 1945. Two of his crew mates never got out of the plane. As he tells a small crowd the story at Atlanta's Peachtree DeKalb Airport, he is overcome with emotion and walks away briefly to gather himself.

The Libery Belle will kick off her 2009 tour in Atlanta, Georgia, on Saturday and Sunday. Peachtree DeKalb Airport, Epps Aviation, 1 Aviation Way. For information, www.libertyfoundation.org

When he returns, Lawing talks about how he was captured on the ground and spent the next several months as a prisoner of war before U.S. Gen. George Patton's Third Army freed him.

Lawing is one of two veteran bomber crew members who have been invited out to the airport by the Liberty Foundation. The foundation is responsible for resurrecting and flying this B-17, often referred to as the "Flying Fortress" because of the 13 machine guns carried aboard the plane.

"Our role is to fly this aircraft as a flying museum, to teach younger people the history of WWII," said Ron Gause, a foundation volunteer and part-time pilot of the Belle.

"It is in honor of those men and women who fought and died for us. And to honor those men who are still living. Some of them fly on the aircraft with us, and we get to hear their stories of what happened to them during WWII. That's the icing on the cake."

But it's not just veterans who get to relive the B-17. Each weekend, for nine months out of the year, the plane tours the United States, providing an opportunity for young and old to take a 30-minute flight on the Liberty Belle.

"It's a wonderful 30 minutes. You get to move to all of the combat positions other than my seat," said Ray Fowler, the Liberty Belle's chief pilot. "The best seat in the house is the bombardier seat in the front. It's a great experience."

But this "experience" doesn't come cheap.

It costs $430 for nonmembers of the foundation to fly a mission. Fowler said the money allows the group to keep the plane airborne. "About half that is to break even just to fly the plane. The rest goes to operating costs."

The fuel costs are the weekend's single largest expenditure. It costs roughly $91,000 to fill the tank, and the four engines burn 200 gallons of fuel an hour.

"There are a lot of forces trying to put these things in a museum," Fowler said. "We want to keep these things flying for the public. It's strictly based on public donations, and we hope to keep it flying for years."

The Liberty Belle was built in 1945 but never saw combat. No longer needed, the plane was sold for scrap before being passed around to several entities before the Liberty Foundation bought it in 2000 and restored it.

Liberty Foundation founder Don Brooks then had it painted as the "Liberty Belle" to honor his father who flew on the original Belle in the 390th Bomb Group during the war.

Fowler, who is a Continental Airlines pilot when he is not flying the Belle, said it's important to remember the high casualties B-17 crews suffered during World War II.

"It's just staggering to think about," he said of the more than 45,000 B-17 crewmen killed or wounded during the war years. "But we tell everybody never pass up an opportunity to tell these guys thank you."

Jonathan Swift, 84, can't say how many missions he flew. The former bombardier remembers at least 30. "I was just busy and didn't keep up with it," he said.

"Somebody asked me if I ever got shot at," Swift said, recalling, "Yes, every mission and you were scared."

He said he's grateful for what the Liberty Foundation is doing. "Of course it means a lot to me. ... Thousands [of B-17s} were just destroyed," he said.

Lawing ended his first flight aboard a B-17 since his fateful leap in 1945, gingerly climbing out through the fuselage hatch to show his fellow passengers how he escaped. His smile reveals that at least this day, the Liberty Belle's mission has been a success.