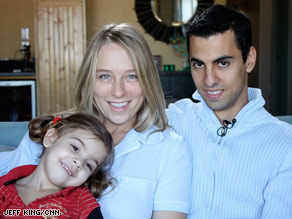 David and Janelle Shimshi 's lack of income has left them struggling to pay for daughter Shalom's preschool.

Las Vegas magician David Shimshi used to work as house magician at the famous Mirage hotel and performed with the World's Greatest Magicians show at the Greek Isles Casino.

Now Shimshi, as he's known to everyone, including his wife Janelle, has seen his gigs disappear, a victim of the struggling economy.

Shimshi's job these days is Mr. Mom, taking care of his 3-year-old daughter Shalom, while his wife Janelle works for a local caterer.

Janelle Shimshi has her own loss to deal with. Her life-long dream of owning a small business went bust. The Shimshis took their life savings and invested in a Smoothie King franchise.

"It looked so promising and it just grew every month," says Janelle Shimshi.

But nine months after they opened, the customers stopped coming in. "You think about it ... Do I want to spend $4.50 on a smoothie or do I want to go put gas in my car?" she says.

The Shimshis aren't the only ones to lose. They once pulled in more than $10,000 each month, much of which they put right back into the Las Vegas economy.

They cancelled their home phone service, pool service, and a monthly pest control service that kept a scorpion problem in check. Restaurants are out along with the tanning spa for Janelle. When their large-screen TV died recently, there was no money to replace it, said the Shimshis.

The couple's daughter Shalom attended a preschool five days a week. With neither parent working, they couldn't afford the $875 monthly tuition. But the school stepped in to help.

Ner Tamid preschool director Lonnie Kritzler says she has been hearing from a family each week that a job is lost and tuition will be hard to make.

"The Rabbi is helping out," says Kritzler. The school is providing "scholarship money to help in that situation. There's no way we could close the doors to any of the children or their parents."

Shimshi is no vanishing act. He's working on a business plan to perform at trade-show display booths for major companies.

He's willing to work just to prove he can bring in the crowds. He even says he's willing to take his pay later, when the company's business improves.

CNN's Dan Simon and Paul Vercammen contributed to this report.

All About National Economy • Las Vegas