(CNN) -- Surviving economically in downtrodden Elkhart, Indiana, may require doing some things you don't want to do. 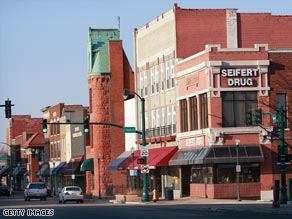 Elkhart, Indiana, has become the poster child for the nation's economic downturn.

"Here in Elkhart, I've never seen things as bad as they are," lifelong resident Yvonne Sell said Tuesday. "When you open the newspaper, unless you want to be a topless dancer, there's nothing."

Elkhart became the poster child for the nation's economic downturn when President Obama visited there Monday and then mentioned it several times during his first White House press conference.

Unemployment in the Elkhart-Goshen, Indiana, area was 15.3 percent in January, the Bureau of Labor Statistics reported, the fourth highest of any U.S. metropolitan area. Elkhart's unemployment rate has spiked more than 10 percentage points in the past 13 months.

But is it really that bad in Elkhart?

According to Sell and several other business owners and workers, it is.

Sell and her four co-owners are in the process of selling Blessing Music Co., which has sold, rented and repaired musical instruments for school bands since 1916.

"We're not making money. It's just too tight," Sell said. The company has high overhead and a "considerable" high-interest loan, and credit continues to be a problem, she said.

Sell said she isn't hopeful that any government plan will kick-start commerce in Elkhart or elsewhere. The banks, which started the mess, have already been bailed out, she said, but "I'm not seeing them loosening their purse strings."

Small businesses as well as individuals need credit -- not government spending -- to keep the economy churning, she said. Take, for example, recreational vehicles, one of the town's knotted lifelines: Sell said she knows plenty of people willing to purchase RVs, but they can't without a bank loan.

"People won't buy them because they're too scared," she said. "I don't personally see how spending the amount of money [Congress is] talking about spending is going to stimulate the economy."

Robert Dunlop runs a different kind of business, but he agrees with Sell.

"Unfortunately, when you drop a ton of money to pay billion-dollar bonuses on the East Coast, it kind of sucks on the Midwest," said Dunlop, president of J.A. Wagner Construction Co. in Elkhart. "If banks can free up a little bit of credit so that people can buy products and get people back to work, that would be good for this area."

People in Elkhart who were interviewed said they don't have much confidence in the government's ability to resolve the crisis, though Dunlop said he thinks tax relief would help some.

"Unfortunately, you still have to have a job to have relief from the tax burden, and a lot of these people are behind in house payments and, quite frankly, it's a vicious cycle: You don't have a job, you can't make your house payment, you're not out buying anything. Even if you reduce the tax burden to those people, they still need to have some sort of income. When that occurs, they start buying things, which creates more jobs, which then starts the cycle back up again."

Elkhart Mayor Dick Moore echoes that view. He said people need jobs so they have money to spend and support industries such as RVs. The Democrat supports the stimulus plan Obama was touting in his town Monday because it will get residents to work quickly.

Watch what Elkhart's mayor says about the president's visit »

"We have 16 shovel-ready projects ready to go ... These are not pie-in-the-sky items; they're not pork. ... These are projects we will have to do," Moore said.

"I think that the government and the banks are the biggest problem, because we have checks and balances to make sure what happened didn't happen, and obviously it didn't work," she said. "They've already bailed out the banks; I don't know why the banks aren't lending money or offering the assistance that most businesses run with."

Smith saw traffic at her gift shop start dropping off at the end of 2007.

"I have a store that is full of wonderful things, but nothing anybody needs," Smith, owner of The Picture Show for 27 years, said with a tense laugh. "We're just in a real reality-check area right now. It's hard not being negative."

Smith has survived in retail by being financially conservative -- she doesn't have any loans to repay and has cut hours for her two employees, she said. Several years ago she downsized her shop from more than 4,000 square feet to a cozy 1,200.

Smith said she feels protective of Elkhart and its image.

"It's a real entrepreneurial city," she said. "We still manufacture here. We still create here. And unfortunately we've lost so much of our diversity of businesses here to China."

Despite these lean times, Smith said she is determined to stay in business.

"Women love to come in here and shop, and we want to be there for them."