(CNN) -- An Ohio sheriff had harsh words for ice fishermen who had to be rescued Saturday after high winds and rising temperatures caused an ice floe to break away and strand about 150 of them on Lake Erie. 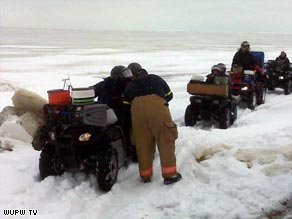 People were stuck when an 8-mile-long chunk of Lake Erie ice broke away near Toledo, Ohio.

The incident, in which one person was pronounced dead after being transported to the hospital, came after the National Weather Service issued a warning that ice floes could break away from the main ice area in the western section of the lake.

At least some of those rescued were fishermen.

Bratton said those rescued should never have been on Lake Erie in the first place because weather conditions made it risky, and "if there was a section in the code about common sense, we would have had 150 arrests out there today."

A spokesman for the U.S. Coast Guard said the person who died fell in the water when the ice floe broke away from land.

"We have rescued more than 150 people, and unfortunately there were two people in the water," Chief Petty Officer Robert Lanier said. "One of the people was recovered and brought to shore," but the other man was pronounced dead after being taken to a hospital.

"This was wrong. These people endangered the life of volunteer firemen, [and] the United States Coast Guard," Bratton said, estimating the cost of the sheriff's office response at $25,000. "I'm sure that's going to climb."

Bratton told the Cleveland Plain Dealer that the fishermen displayed poor judgment in building a makeshift bridge to get from one section of the ice to the other.

"I have no problem with people ice fishing, but these idiots should realize that when you see open water, you should not build a bridge and cross it," he said. "It's a shame you can't arrest people for stupidity."

Among the hundreds of people who went fishing Saturday were Gary and David Vaughn of Conneaut Lake, Pennsylvania.

They told the Plain Dealer that they set up a shanty about 7 a.m. and didn't come back out until 11 a.m., when they saw a crowd gathered at the edge of the ice. It was then that they knew they were in trouble.

"When we were over there waiting to be rescued, we feared the ice would just break up under us," Gary Vaughn, 47, told the newspaper. "I feared for my life."

The sheriff told the Toledo Blade that the people who went out on the ice did not take proper precautions.

"Where is the common sense when they know the ice is broken?" Bratton said.

"The experienced fishermen, I guarantee, are not out there," he told the newspaper. "They're not reading the weather. If the ice is broke, you don't build a little bridge to get from here to there."

"Ice fishing and recreation on the ice is a culture in the Great Lakes. It's something we've become used to," Lanier said. iReport.com: Were you there? Share your photos, story

The sheriff said there were a host of factors that the fishermen should have been aware of, which caused them to risk their lives unnecessarily.

"The weather changed; the temperature went up; the wind was coming out of the south. These are all things that are indicators [that an ice floe break could occur]."

Asked whether there are signs or other notification systems to discourage fishermen from going out on the ice under risky conditions, Bratton said there are only Web sites fishermen can check.

"We will go back and look at that," he said. "We can't develop the attitude, 'Go out on the ice. If you get caught, we'll be there to get you. We'll bring you in.' You've got to have common sense."

Unprecedented numbers of fishermen have taken to the ice this winter because thicker ice allowed them to go farther out onto the lake, according to the Plain Dealer. But Saturday's unseasonably high temperatures apparently melted chunks of the ice.

The ice floe, 8 miles long, was created when a large piece of ice broke off from land near Locust Point, Ohio, east of Toledo, Lanier said earlier.

View a map of the area »

Numerous helicopters participated in the rescue, Lanier said, including those from the Canadian Coast Guard, the U.S. Coast Guard, Ohio State University and Monroe County. State hovercraft were on the scene as well, and airboats were sent, he said.

Those rescued were brought to a staging area at a park, Lanier said.