WASHINGTON (CNN) -- The former Halliburton subsidiary KBR has been charged with bribing Nigerian government officials with "tens of millions of dollars" to obtain "billions of dollars in contracts," according to court documents filed late Friday in Houston, Texas. 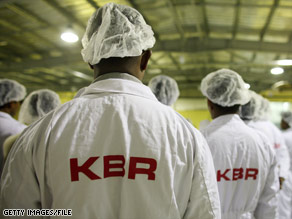 KBR was spun off from its former parent corporation Halliburton in 2007.

Justice Department lawyers filed an "information," which is generally associated with an expected plea agreement.

The Justice Department had no comment on the filing, but officials familiar with the case said they expected KBR representatives to appear Wednesday in federal court in Houston.

The 22-page court document outlines a complex joint venture involving KBR and the Nigeria government-owned National Petroleum Corporation charged with developing the country's oil and gas industry. The contracts involved the design and construction of a natural gas plant.

"We are not providing comment at this time," said company spokeswoman Heather Browne in an e-mail. She referred CNN to a filing in October that cited a consortium that included KBR called TSKJ.

The company said that in June 2004 it terminated its relationship with Stanley, and noted his guilty plea.

"By the plea, Mr. Stanley admitted that he participated in a scheme to bribe Nigerian government officials and that payments were made by agents of TSKJ to Nigerian officials in connection with the construction and expansion by TSKJ of the complex at Bonny Island," it said.

KBR, which was spun off from its former parent corporation Halliburton in 2007, has been under fire for its business practices in providing logistical support to the U.S. war effort in Iraq. The Nigerian charges are separate from KBR's contracts in Iraq and Kuwait.