(CNN) -- An explosion that critically injured the chairman of the Arkansas Medical Board on Wednesday was caused by a bomb, police said. 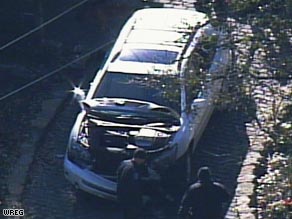 Dr. Trent Pierce was wounded when the car blew up in front of his West Memphis, Arkansas, home, authorities said.

Earlier, police told CNN affiliate WREG that they did not believe foul play was involved.

Pierce, a family practitioner who specializes in asthma, was flown to a Memphis, Tennessee, hospital in extremely critical condition, the station reported, citing police. The blast occurred at about 8 a.m. as Pierce got into the car, affiliate WMC-TV reported.

Aerial footage from the scene showed the white SUV with its hood blown up and its front end extensively damaged.

Medical board spokeswoman Peggy Cryer said the board heard Pierce was flown to the hospital but had no definite information beyond that.

"We do not know enough to give any kind of statement," she said.

Callers to Pierce's office received an answering machine message saying the office is closed, but the call repeatedly disconnected during the recording, preventing messages from being left.

Doris Davis, who works in an eye doctor's office next door, said Pierce's office staff is swamped trying to deal with patients who arrived for their appointments.

FBI spokesman Jason Pack said agents were en route to the scene, along with personnel from the Bureau of Alcohol, Tobacco, Firearms and Explosives. The FBI is assisting local authorities in their investigation, he said.

West Memphis, Arkansas, and Memphis, Tennessee, are separated by the Mississippi River.

Pierce was described as a pillar of the community in West Memphis, a small town of about 30,000 people.

Davis said Pierce is well-liked, active in his church and is married with two adult children.

She said the FBI was at her office and interviewed her boss, Dr. Eddie Bryant. Bryant is a close friend of Pierce's and went to medical school with him, Davis said.