CHICAGO, Illinois (CNN) -- Fire early Wednesday caused extensive damage to the roof and attic of the Holy Name Cathedral, fire and church officials said, but the sanctuary of the beloved 134-year-old city landmark and seat of Chicago's archdiocese was spared. 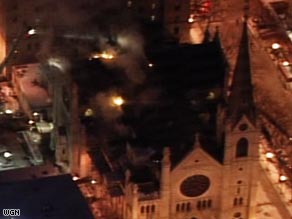 The present Holy Name Cathedral was built after the Great Chicago Fire of 1871 destroyed the original.

Cardinal Francis George, who said the cathedral's roof would probably have to be rebuilt, said a firefighter strained his back, but there were no other reports of injuries.

"Chicago has always bounced back from fires, and I think we'll bounce back from this one," he said.

The blaze stunned parishioners such as Lary Ligas, who said "it's not just a Catholic church. It's part of Chicago."

Starting about 5:30 a.m. CT, the fire raged for 2½ hours until firefighters extinguished it.

George noted that water poured from the roof onto light and electrical fixtures, and there were icicles on the pews. Fire Department spokesman Larry Langford said the sanctuary floor in front of the altar area was flooded with several inches of water, but the altar area was not damaged.

Langford said the ceiling inside the cathedral "looks good. The lights are still on inside."

About a dozen fire trucks responded to the church at State and Superior streets. Firefighters did an "excellent" job keeping the fire from spreading, Langford said, adding that the cause of the blaze was under investigation.

Archdiocese officials said the five cardinals' hats, or galeros, suspended from the ceiling were drenched but remain intact. Each hat had been raised after a cardinal's death.

The fire started in an attic area where major repairs were being made. Jimmy Lago, chancellor of the archdiocese, noted that work was being done on pillars in the cathedral and on some deteriorating wood high in the rafters. iReport.com: 'The cathedral is burning'

Lago said a laborer was present at the time the fire broke out, but he didn't know whether he was working in the area where the fire started.

The cathedral had been closed for six months to undergo major structural repairs and had reopened at the end of August, church officials noted. The current work was being done on support beams.

"It's a huge setback for all the parishioners for the archdiocese," Ligas said.

The Gothic structure was built after the Great Chicago Fire of 1871 destroyed the former church. Brooklyn, New York, architect Patrick Charles Keely designed the building, and the cornerstone was laid July 19, 1874.