ATLANTA, Georgia (CNN) -- Millard Fuller, who founded Habitat for Humanity International along with his wife, has died, officials said Tuesday. He was 74. 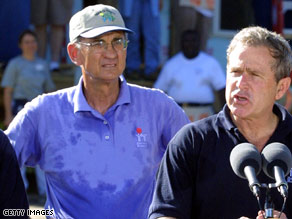 Millard Fuller appears with President Bush at a Habitat for Humanity event in Tampa, Florida, in 2001.

Fuller died early Tuesday "after a brief illness," said a statement on the Web site of the organization he currently headed, Fuller Center for Housing, in Americus, Georgia.

"Family and friends are mourning the tragic loss of a great servant leader and a genuine heart," the statement said.

Fuller had suffered from chest congestion for three to four weeks, said Holly Chapman, spokeswoman for the Fuller Center. He died about 3 a.m. en route to a hospital, she said.

With his wife, Linda, Fuller founded Habitat for Humanity International in 1976.

The Alabama native rose "from humble beginnings" to become a "young, self-made millionaire," according to his biography on Habitat for Humanity's Web site. He and a college friend began a marketing firm while still in school, "but as his business prospered, his health, integrity and marriage suffered," the biography said.

"These crises prompted Fuller to re-evaluate his values and direction. His soul-searching led to reconciliation with his wife and to a renewal of his Christian commitment," it said.

The Fullers sold all their possessions, gave money to the poor and began searching for a new direction. They found Koinonia Farm, a Christian community near Americus in rural southwest Georgia, the biography said.

Along with Koinonia founder Clarence Jordan and a few others, the couple initiated several enterprises, among them a housing ministry that built modest homes on a no-interest, nonprofit basis and made them affordable to low-income families.

Homeowner families were expected to use their own labor to help defray costs on their home as well as homes for other families. Money to build homes was placed into a revolving fund, enabling more to be built, according to the biography.

In 1973, the Fullers moved to Africa to test their housing model, the biography said. Their project was launched in Zaire -- now the Democratic Republic of the Congo -- and was a success. "Fuller became convinced that this model could be expanded and applied all over the world," the biography said.

When Fuller returned to the United States three years later, he met with a group of associates to create Habitat for Humanity International. According to its Web site, Habitat has provided shelter for more than 1.5 million people in more than 3,000 communities.

"I see life as both a gift and a responsibility. My responsibility is to use what God has given me to help his people in need," Fuller once said, according to Habitat's Web site.

Former President Carter, a key Habitat supporter, fellow Georgian and a close friend, issued a statement Tuesday saying Fuller "was one of the most extraordinary people I have ever known."

"He used his remarkable gifts as an entrepreneur for the benefit of millions of needy people around the world by providing them with decent housing," Carter said. "As the founder of Habitat for Humanity and later the Fuller Center, he was an inspiration to me, other members of our family and an untold number of volunteers who worked side-by-side under his leadership."

In 1996, President Clinton awarded Fuller the Presidential Medal of Freedom, the nation's highest civilian honor, calling Habitat "the most successful continuous community service project in the history of the United States."

Fuller left Habitat for Humanity in 2005 amid a dispute with the organization's board. Habitat said in a statement at the time his termination culminated "several months of differences between the Fullers and the board over allegations of inappropriate personal behavior of Millard Fuller toward a now-former female employee," according to an article in the February 2005 edition of Christianity Today magazine.

The organization noted there was insufficient evidence to corroborate the complaint, according to Christianity Today, but said Fuller engaged in "a pattern of ongoing public comments and communications ... that have been divisive and disruptive to the organization's work."

For his part, Fuller told the magazine he feared the board used the controversy to push him out to find a "high-paid bean counter" instead of someone with "strong Christian commitment."

"We've overloaded the board with 'money' people, all of whom are nominal Christians, but many of whom are not spiritually grounded," he told the magazine. "Some seem put off by my overt declaration of Jesus."

After his departure, Fuller founded the Fuller Center for Housing, which its Web site describes as "a nonprofit, ecumenical Christian housing ministry dedicated to eliminating poverty housing worldwide."

The center was founded after Fuller "set out to expand his missionary vision" by returning to his roots at Koinonia Farm, a cooperative community dedicated to peace and service.

A new mission statement was issued at Koinonia dedicating the Fuller Center as "a Christ-centered, faith-driven organization witnessing the love of God by providing opportunities for families to have a simple, decent place to live," according to the site.

Funeral services are scheduled for Wednesday, said Chapman, the Fuller Center spokeswoman. Fuller will be buried at Koinonia Farm, according to the center's Web site.

All About Habitat for Humanity International Inc. • Jimmy Carter