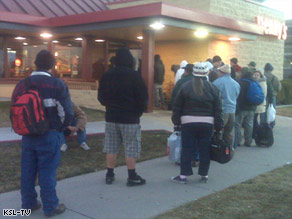 Denny's announced in a commercial Sunday during the Super Bowl that it would give away its signature breakfast from 6 a.m. until 2 p.m. local time Tuesday at all its restaurants in the U.S., Canada and Puerto Rico.

Media outlets reported customers lined up outside the doors of many of Denny's 1,500 locations.

Some patrons were still wearing their pajamas and slippers, and strangers were crowding together into booths, CNN affiliate KSL-TV in Salt Lake City, Utah, reported.

"You couldn't beat it. I mean it was a beautiful, beautiful breakfast. It was fit for a queen or a king," diner Annah Shoffner told CNN affiliate WNCN-TV in Raleigh, North Carolina.

"To do this is amazing and not something you hear of every day, especially in today's economy -- that we're getting something free," Debbie Brugger of Essex Junction, Vermont, anticipating a hearty breakfast at a Denny's in Burlington, told CNN affiliate WCAX-TV.

A college student who identified himself as DeShawn told CNN affiliate KFSN-TV in Fresno, California, that he came out for the free breakfast "to do better in class -- brain food, you know?"

A manager at a Denny's in Raleigh, North Carolina, called the promotion a little "economic stimulus" for the average hardworking person, CNN affiliate WTVD-TV reported.

"A lot of restaurants in the community have been going out of business, and we're aggressively going after the business," Eddie Rice, owner of a Denny's in Peoria, Illinois, told CNN affiliate WEEK-TV.

Waitress Terri Gibson told CNN affiliate WMFD-TV that her restaurant in Mansfield, Ohio, was busy but everything was going smoothly and no one was complaining. iReport.com: Miami customers line up for Denny's meal

The company said it was expecting an additional 2 million customers to turn out for the promotion.

"This free offer is our way of reacquainting America with Denny's real breakfast and with the Denny's brand," Chief Executive Nelson Marchioli said in a statement.

The Grand Slam breakfast consists of two pancakes, two eggs, two strips of bacon and two sausage links. It weighs in at 44 grams of fat, 56 carbohydrates and 770 calories, according to CNN affiliate KETV in Omaha, Nebraska. iReport.com: Vouchers run out at Georgia Denny's

The Grand Slam started as a baseball-related promotion in Atlanta, Georgia, in the mid-1970s and has been served chainwide since 1977. Its normal price varies by market but averages around $5.99. Denny's said it sells 12.5 million Grand Slams a year.

All About Denny's Corporation • Diet and Nutrition