At least 7 die as bus overturns near Hoover Dam 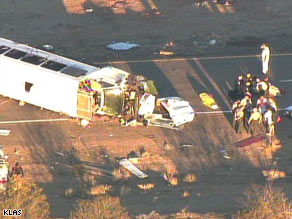 Authorities work on the crash scene Friday on U.S. 93 in White Hills, Arizona, near Hoover Dam.

The dead lay in body bags on the roadway near the bus, which was on its side across both lanes and onto the shoulder of the highway.

Initial reports from the scene indicated rescuers had difficulty communicating with the passengers, all of them Chinese nationals.

Five of the injured were taken to Kingman Regional Medical Center, where one was in critical condition and four were in serious condition, said Ryan Kennedy, executive director of operations.

Rick Plummer, a spokesman for University Medical Center in Las Vegas, said the hospital received five victims by helicopter, one who died, two in critical condition and two in serious condition.

The north-south highway at the crash scene in White Hills, Arizona, was shut in both directions. Officials said the bus was heading from Las Vegas to Arizona. Hoover Dam is near the border of the two states.

Among the injured was a motorcyclist who was hurt avoiding the bus, said National Park Service spokesman Andrew Munoz.