TSA will keep an eye on fans at Super Bowl

WASHINGTON (CNN) -- Some of the security officials at this weekend's Super Bowl will be scrutinizing the body language and demeanor of fans as part of the effort to spot suspicious and possibly dangerous people in the crowd. 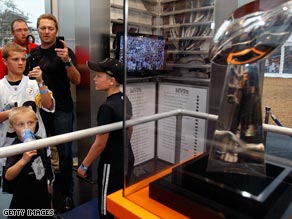 Fans take in the sights Thursday at the NFL Experience at Raymond James Stadium in Tampa, Florida.

The Transportation Security Administration says it will have several teams of behavior-detection officers working with local police in Tampa, Florida, as an added security measure for the high-profile game.

TSA spokesman Christopher White said that the officers are being sent at the request of the local police and the FBI, and that it's the first time such officers are assisting with a major sports event.

"Unlike technology, the human detection officers can be anywhere," White said. "They can be completely unobtrusive."

The TSA officers will be wearing their uniforms and working in teams with police along the stadium's security perimeter but won't work inside the stadium as fans watch the game. They'll also be around key hotels associated with the Super Bowl, the airport and other transportation centers in Tampa.

Watch what goes on at Super Bowl media day »

According to White, if a TSA officer observes someone displaying unusual behavior, a local police officer will follow up by questioning the person.

This month, the TSA also held a four-hour training session on behavior detection for about 100 Tampa-area police. The TSA officers themselves undergo an initial seven days of training before being paired with experienced officers and having follow-up training.

Barry Steinhardt of the American Civil Liberties Union said such behavior screening is a bad idea.

"There is no scientific evidence behavior profiling works to pick out terrorists or criminals," Steinhardt said.

The TSA uses behavior screening daily at airports. White said officers also have helped out at such high-profile events as last week's presidential inauguration and the Republican and Democratic national conventions.