(CNN) -- Evangelical pastor Ted Haggard described Thursday as "fundamentally true" an assertion that he engaged in an inappropriate relationship with a 20-year-old male volunteer in 2006. 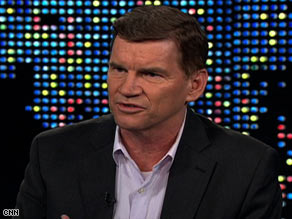 Pastor Ted Haggard acknowledged on CNN's "Larry King Live" that he had a second relationship with a man.

The incident occurred when the two men were in bed together, Grant Haas said in a videotaped interview played on CNN's "Larry King Live."

Haas added, "(Haggard) used to say to me, 'You know what, Grant, you can become a man of God, and you can have a little bit of fun on the side."

Haggard, 52, said the incident was "an indicator of the compulsive behavior" that ruled him at the time. However, he said he has been undergoing therapy during the two years since and "working it out."

Controversy involving Haggard first erupted in November 2006, when a former prostitute, Mike Jones, said the pastor had paid him for sex over three years and had used methamphetamine in his presence.

Haggard initially admitted in interviews that he received a massage from Jones but denied having sex with him. He also said he bought methamphetamine, but threw it away instead of using it.

Haggard is the former president of the National Association of Evangelicals, which claims to represent millions of people in 45,000 congregations nationwide. He was also the head pastor at New Life Church.

In a settlement with New Life, the church and Haggard agreed that he would retain his six-figure salary for a year, leave the Colorado Springs area, receive counseling and not speak publicly about what had happened for one year, according to a church staff member with knowledge of the settlement but who was not authorized to speak on the record.

In the CNN interview, Haggard credited Jones with having helped him by disclosing that information.

"I think he rescued me. I'm very grateful to him," Haggard said. He said he would have lost the support of his wife of 30 years, Gail, and their five children "and been a drug addict" had he not been caught.

"I paid a heavy price. It was stupid," he said.

Haggard likened his struggles with his desires to the struggles faced by dieters who say, "'I'm not going to eat today' and then they eat."

"Many of the charges against me are exaggerated, but it doesn't matter," Haggard told Larry King. "I'm guilty enough of so many things."

He acknowledged that his actions were hypocritical, but said he could not control his urges.

"I felt like God's plan was for sexuality to be in a monogamous, heterosexual marriage," he said. "I wanted that. But at the same time, I had these other things going on."

Haggard said he had thought that focusing on his spiritual life would help, but found that it did not. "It actually made me worse," he said.

Haggard said that, for a time, he lost the ability to read the Scriptures and became suicidal. "I think it was divine intervention that stopped me," he said.

Asked if he has engaged in inappropriate conduct with any other men, Haggard did not give a direct answer, saying only, "I have thoroughly discussed all of my sexual history with my wife and my therapist and, to some degree, the family, and we think that's an appropriate boundary for that."

Asked whether he considers himself bisexual or gay, Haggard said that different therapists have described him in different ways. "The first said, 'You are a heterosexual with homosexual attachments.' I wasn't sure what that meant."

His current therapist, he said, described him as "a heterosexual with complications."

Haggard said he has, at least, another year of therapy ahead of him.

"I think I'm still deeply wounded and scarred and somewhat confused," he said. About other men, he added, "I have thoughts from time to time, but not compelling thoughts."

Nevertheless, he said, "Today, I'm 100 percent satisfied with my relationship with my wife, and I have no compelling things in my life toward others."

He said he initially urged his wife to leave him, but she refused.

"I really do love this man," she told CNN when asked why she did not leave. But it was also her faith that led her to stick with the marriage, she said. "The teaching of Jesus is that we forgive and that we love."

She said the two had "a great sexual relationship in our marriage ... throughout marriage."

Though the news of his unfaithfulness came as a shock, it wasn't completely out of the blue, she said. "I knew that Ted had some struggles in this area, particularly in his thoughts. I never knew that he acted on them."

Marcus Haggard, the couple's 25-year-old son, said he, too, was shocked by the revelations, but was more disturbed to learn that his father had lied. Still, he said the news brought the family closer together.

"He had lived so long on a pedestal," Marcus Haggard said about his famous father. "He seemed practically perfect. There was a sense of relief in the fact that we could connect with our dad."

Asked if he wants to return to the pulpit, Haggard said, "I think Gail and I both want to tell our story to the degree that it's helpful to other people. I don't know that that would mean a pulpit, but certainly I'd be interested in public speaking."

His appearance Thursday coincided with the debut of an HBO documentary called "The Trial of Ted Haggard."