'Made in China'? Not at Capitol Visitors Center

WASHINGTON (CNN) -- Washington souvenirs worth $100,000 -- including images of the Capitol dome and printings of the U.S. Constitution -- are locked in storage, blocked from sale in the new U.S. Capitol Visitors Center because the items are made in China. 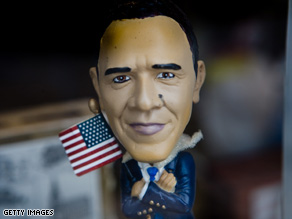 Political-themed souvenirs such as this Obama bobblehead doll are for sale across Washington.

Rep. Bob Brady, D-Pennsylvania, chairman of the House Administration Committee, said he warned operators of the visitors center not to purchase merchandise made outside the United States, but they did it anyway.

Although the center has the goods in hand, Brady said, "I'm not allowing them to sell those products."

His Administration Committee oversees operations in the House of Representatives, including the House restaurant, parking facilities and the Capitol Visitors Center. A spokesman for the committee said other House gift shops also are under restrictions on items made outside the United States.

Brady, whose district includes Philadelphia, insists that it's wrong for tourists to return home with a souvenir from the nation's capital that bears a "'Made in China' sticker."

"We can certainly find people that can make souvenirs of the nation's capital in America," Brady said.

In the past 10 days, he said, up to 40 U.S. companies have contacted his office, eager to provide Capitol souvenirs and trinkets.

As for the items the Capitol Visitors Center operators got from China, Brady said, "they made the mistake; they can send them back."

All About U.S. Capitol • U.S. House Committee on House Administration