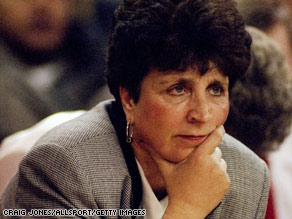 North Carolina State University's Kay Yow, in 1996, was one of only six coaches to amass 700 wins.

In her 34 years on the sidelines for the Wolfpack, her teams won four Atlantic Coast Conference titles, averaged 20 wins a season, appeared in 20 of 27 NCAA tournaments and reached the Final Four in 1998.

She was one of only six coaches in the women's game to win at least 700 games, the university said.

She also coached the 1988 women's Olympic basketball team to a gold medal in Seoul, South Korea.

Yow was beloved by her players, colleagues and fans, and in 2007, N.C. State christened the court in Raleigh's Reynolds Coliseum in her name.

Since being diagnosed with breast cancer in 1987, Yow had been active in efforts to raise awareness and money to battle the disease, which forced her to miss two games during the 2004-05 season and another 16 in the 2006-07 season, the university said.

She helped establish the Kay Yow/WBCA Cancer Fund, which raised money for the cause.

About three weeks ago, Yow announced that she was stepping away from coaching duties for the remainder of the 2008-09 season, after missing four straight games because of an extremely low energy level.

"Stepping away from coaching is one of the hardest decisions I have had to make," Yow said January 6, according to N.C. State.

Yow was born in 1942 in Gibsonville, North Carolina, about 16 miles outside Greensboro. She began coaching at local high schools in 1964 before Elon University hired her. N.C. State hired her in 1975.

"It has been an honor and a privilege to work with Coach Yow for the last 15 seasons. I suddenly find myself grasping to retain everything she has ever said and ever taught me," interim head coach Stephanie Glance said, according to the university.

The team's game against Wake Forest University, which was scheduled for Monday, has been postponed until February 10 in Winston-Salem, the university said.