WASHINGTON (CNN) -- Less than 24 hours after saving a woman who fell in front of a Washington subway train, a Houston, Texas, transit cop was at it again. 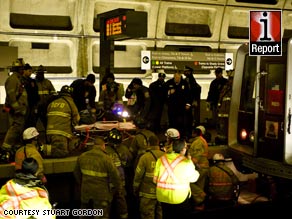 Moments after leaving an interview Wednesday about his heroics at the train station, Houston Metro Officer Eliot Swainson helped victims escape an early morning fire at a Washington row house.

Swainson, who was deputized to help with crowds at President Obama's inauguration, and two Washington transit officers noticed smoke pouring from the row house in northwest Washington.

"I just turned to the transit guy and said, 'It's your turn to be a hero,' " Swainson told CNN affiliate KIAH-TV in Houston.

Swainson and the two others were the first on the scene. One of them called firefighters and all three began alerting residents of the building.

"We just pounded on doors and stuff," he said. "We couldn't get into the unit that was actually burned -- there was just too much smoke coming out of there."

When firefighters arrived, they rescued a 14-year-old boy from the burning unit. A woman in that unit was killed, authorities said. An elderly man, one of those who escaped before firefighters arrived, was treated for smoke inhalation, but his injuries weren't life-threatening, local media reported.

A day earlier, a 68-year-old woman from Nashville, Tennessee, fell off a platform and onto the tracks at a Washington station. Swainson first tried to pull her out. Then, as an approaching train roared down the tunnel toward them, he tucked her into a three-foot space under the platform, where she escaped with only minor injuries.

His actions won accolades from Washington's top metro officer, Chief Michael Taborn, who said Swainson did exactly what he was supposed to do and that he was "enormously grateful for his actions."

Washington's metro system said transit officers like Swainson from 18 locations around the country were in town to assist with the inauguration. Ridership records were shattered Tuesday -- there were more than 1.5 million trips across all the authority's platforms, including more than 1.1 million on the subway system.

The Nashville woman's was the only accident reported along transit lines, a spokeswoman said. She was treated and released from a hospital on Tuesday.

On Thursday, Swainson, a former Houston police officer, was slow to accept the label of hero.

"It's an interesting situation," he said of all the hubbub over his actions. "But it's what we're trained to do."

But he couldn't resist playing along when a reporter asked whether -- like Superman -- he was wearing a shirt with a giant letter "S" beneath his uniform.