WASHINGTON (CNN) -- Look up at any presidential event and you're likely to see them: men dressed in black, armed to the teeth, looking back. 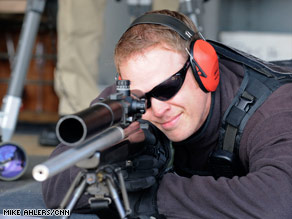 Countersniper teams "will be familiar with every potential threat," according to the Secret Service.

It's no secret; they're with the Secret Service.

On Tuesday at the inauguration, members of the U.S. Secret Service's elite countersniper unit will be out in force, taking roof-top positions along Pennsylvania Avenue and elsewhere as the presidential motorcade glides past throngs of people for the swearing in of Barack Obama.

The Secret Service doesn't mind you knowing they are up there. In fact, their mere presence at the inauguration has a deterrent effect, they say. But they are mum about many other details, including how many teams will be deployed, how long they work and about their custom firearms.

Since the unit formed in 1971, the unit has never had to fire a JAR to safeguard a person they are assigned to protect.

But the absence of gunfire -- a welcome absence in this line of work -- doesn't mean they have never identified or mitigated a threat, Sullivan says.

The teams typically consist of two people, both armed with high-powered rifles, either of whom can shoot to deter an imminent threat. If one countersniper spots a threat, that person prepares to shoot while the other member takes on the role of "wind caller," telling the shooter how to adjust his aim to counteract the wind.

The wind caller takes cues from chimney smoke, flags or undulations from the atmosphere.

CNN's Jeanne Meserve reports on how the counter snipers of the U.S. Secret Service are gearing up for Inauguration Day.

At a firing range outside of Washington, the team demonstrates its skills in a variety of positions. Both men peer through high-powered binoculars looking for threats.

"Watch the threat area," an instructor shouts. Thirty seconds pass before a target pops up down range. One of the countersnipers drops his binoculars and reaches for his weapon, shouting to his colleague.

"Left side. Left side," the wind reader responds.

The shooter fires one shot.

"Center! In the middle," the instructor reports.

While the countersnipers can scan the crowds below, their focus is on looking for places where snipers might be concealed, team members say.

All countersnipers go through nine weeks of intense training. Half of those who try out for the team fail. Fewer than 200 people have been assigned to the unit in its 30-plus year history, the service says. There are fewer than 100 countersnipers in the unit, a Secret Service spokesman says.

This isn't a job for someone who can't handle extreme temperatures. The cold can be biting; the heat, blistering.

On Tuesday, in addition to the snipers, an estimated 8,000 police officers will be on duty, along with almost 1,000 FBI personnel, Transportation Security Administration screeners and others, including 10,000 National Guard troops. The Department of Homeland Security has said that another 20,000 members of the National Guard are being held in reserve.

"I think we are ready," said Homeland Security Secretary Michael Chertoff. "I don't anticipate anything disruptive. Part of my job is to hope for the best and plan for the worst."