(CNN) -- Two days before US Airways Flight 1549 crashed into the Hudson River, passengers on the same route and same aircraft say they heard a series of loud bangs and the flight crew told them they could have to make an emergency landing, CNN has learned. 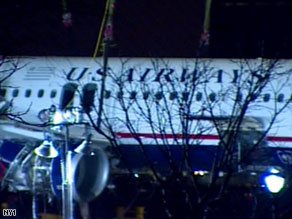 Crews successfully hoist the wreckage of US Airways Flight 1549 out of the water on Saturday.

Steve Jeffrey of Charlotte, North Carolina, told CNN he was flying in first class Tuesday when, about 20 minutes into the flight, "it sounded like the wing was just snapping off."

"The red lights started going on. A little pandemonium was going on," Jeffrey recalled.

He said the incident occurred over Newark, New Jersey, soon after the plane -- also flying as Flight 1549 -- had taken off from LaGuardia Airport in New York.

"It seemed so loud, like luggage was hitting the side but times a thousand. It startled everyone on the plane," Jeffrey said. "We started looking at each other. The stewardesses started running around. They made an announcement that 'everyone heard the noise, we're going to turn around and head back to LaGuardia and check out what happened.'

"I fly about 50 to 60 times per year, and I've never heard a noise so loud," he said. "It wasn't turbulence, it wasn't luggage bouncing around. It was just completely like the engine was thrown against the side of the plane. It just -- it didn't shake the plane but it shook you out of the seat when you're drifting off, it really woke you up. And when it happened again, everyone just started looking at each other and there was a quiet murmuring around the plane, and you could feel the tension rising just in looking.

"I remember turning to my [business] partner and saying, 'I hope you got everything in order back home, life insurance and everything, because that didn't sound good.' "

Jeffrey said he sent a text message to his wife about a "scary, scary noise on the plane. Doesn't sound right. They're flying back to LaGuardia to check it out. I'll call you when we land. I love you."

He added, "About 10 minutes later when we never made the turn, we kept going, that's when the pilot came on and explained -- I wish I could remember the words -- I remember him using air, compression and lock -- I'm not sure the right order, but he made it sound like the air didn't get to the engine and it stalled the engine out, which he said doesn't happen all the time but it's not abnormal."

Expert Aviation Consulting, an Indianapolis, Indiana, private consulting firm that includes commercial airline pilots on its staff, said the plane that landed in the Hudson was the same one as Flight 1549 from LaGuardia two days earlier.

See images from the rescue in last week's crash »

"EAC confirms that US Airways ship number N106US flew on January 13, 2009, and January 15, 2009, with the same flight number of AWE 1549 from New York's LaGuardia Airport to Charlotte Douglas [International] Airport in North Carolina," Expert Aviation said in a statement to CNN.

The company said it checked with contacts in the aviation industry to confirm that it was the same plane.

The National Transportation Safety Board released the tail number of the downed Airbus A-320, which is N106US.

NTSB spokesman Peter Knudson said as part of its investigation into the Hudson River crash, it will be looking at all maintenance activities, but has no indications of any anomalies or any malfunctions in the aircraft, so far in the investigation.

Following CNN's inquiry, he confirmed that the Airbus 320's maintenance records show "there was an entry in the aircraft's maintenance log that indicates a compressor stall occurred on Jan. 13."

The Federal Aviation Administration referred CNN to US Airways.

US Airways would not confirm that the Flight 1549 that took off January 13 was the same plane that splashed into the Hudson two days later.

Valerie Wunder, a US Airways spokeswoman, said: "US Air is working with the National Transportation Safety Board in this investigation." She would not comment on any other details, including Tuesday's flight, though she did confirm US Airways is looking into it.

Jeffrey told CNN that US Airways earlier Monday confirmed to him that the Tuesday incident occurred aboard the plane that crashed.

John Hodock, another passenger on the Tuesday flight, said in an e-mail to CNN: "About 20 minutes after take-off, the plane had a series of compressor stalls on the right engine. There were several very loud bangs and fire coming out of the engine. The pilot at first told us that we were going to make an emergency landing, but after about five minutes, continued the flight to Charlotte."

A third passenger, who did not want her named used, also said she heard a "loud banging sound" on the right side of the plane. She said she heard the pilot say the "compressor for the engine was stalled" and they needed "to turn around and go back." However, she said, the problem was fixed and the flight continued without incident.

A bird strike could lead to a compressor stall, the officials said.

All About US Airways Group Inc. • Air Travel