(CNN) -- Fred Berretta was aboard US Airways Flight 1549 bound for Charlotte, North Carolina, when he heard a loud bang and the plane shook. 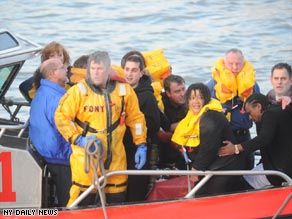 The New York Fire Department rescued passengers from the downed plane in the Hudson River.

"We were still on ascent, and the engine blew out," he said. "The pilot turned around and made a line for the river."

"All of a sudden, the captain came on and said brace for a landing, and that's when we knew we were going down," he said.

The Airbus A320, carrying Panero and more than 150 other passengers and crew, crash-landed in the Hudson River on Thursday after taking off from LaGuardia Airport in New York.

A New Jersey State Police source told CNN the pilot radioed to air traffic controllers that he had experienced a bird strike and declared an emergency.

"We knew there wasn't a lot of time because we were quite close to the ground, and it felt as though the descent was somewhat rapid," said Berretta, who said he was sitting in seat 16A.

As the plane headed down toward the river, the cabin was mostly silent, he said.

"After he told us prepare for impact, it was pretty evident we were not going to make the runway."

At first, it felt like the plane was gliding, Berretta said, as if no engines were working.

"People started praying, and there was a lot of silence, and the realization that we were going in was really hard to take in at that moment," he said.

As the plane started to go down, some passengers shouted to those in exit rows to be prepared to quickly open the doors.

Berretta spent that time contemplating the chances of surviving a water crash.

"I think that [it] certainly went through my mind that this probably very much could be it," he said.

Then the plane hit the water. Panero said the impact felt like a car crash.

Some said that as the plane hit, there were extremely loud noises.

"The plane was jockeying about, spinning a bit," Berretta said.

Jeff Kolodjay was sitting in seat 22A right next to the engine believed to have caused the plane to go down.

Upon impact, passengers left behind their coats and luggage. They grabbed life vests and seat cushions and headed toward the exits.

"It seemed like it lasted an eternity," Berretta said.

When the plane began to sink, some passengers began to panic, Panero said.

Watch Panero describe what he saw and heard »

"But there was a couple of people who kind of took charge and just started yelling to calm down, just to get everybody out," he said. "Once people realized that we were going to be OK, everybody kind of calmed down and just tried to get out of the plane to safety."

Passengers began to group themselves on the wings to stay out of the frigid water.

When they were safely out of the plane, Berretta said, there was one more moment of fear.

"Our raft was tethered to the plane, and we worried we might go down with the plane," he said. "But we were able to get a knife off a rescue boat and cut the tether."

More than anything, passengers wanted to thank the crew. As Berretta exited the plane, he said that besides a few passengers remaining, the crew and pilot stayed behind to make sure everyone was out.

"I think the pilot, he did a great job," Berretta said. "I think it was as good of a landing as you can make in a river."

All About LaGuardia Airport • Hudson River • Accidents and Disasters