WASHINGTON (CNN) -- Dozens of suspected terrorists released by the United States from Guantanamo Bay, Cuba, are believed to have returned to terrorism activities, according to the Pentagon. 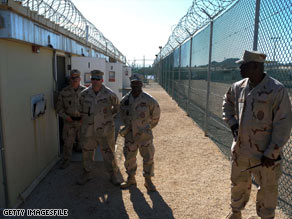 Pentagon officials say 61 former Gitmo detainees have committed or are suspected of returning to terrorism.

Since 2002, 61 former detainees have committed or are suspected to have committed attacks after being released from the detention camp, Pentagon spokesman Geoff Morrell said at a briefing Tuesday.

The number is up since the Pentagon's last report in March 2008 when officials said 37 former detainees had been suspected of returning to the battlefield since 2002.

Since 2007, more than 100 detainees were released, significantly more than in previous years, according to Pentagon officials.

According to the statistics, of the 61 former detainees that are believed to have returned to fighting, 18 have been officially confirmed while 43 are suspected, Morrell said.

The 18 were confirmed through intelligence, photographs, fingerprints and other information, Morrell said.

Of the 43 other detainees suspected of taking part in terrorist attacks, only "plausible reporting" on their activities indicated some kind of involvement, according to Morrell.

Officials would only identify one of the confirmed attackers, Adballah Salih al-Ajmi, a Kuwaiti man released from U.S. custody at the Guantanamo Bay Naval Base in 2005. Pentagon officials said Salih al-Ajmi blew himself up in a suicide attack in Iraq in April 2008.

Since 2002, the Pentagon has released about 520 detainees to their home countries or counties that agreed to take them. Some have been released in full by those countries while others are still being held.

"There, clearly, are people who are being held at Guantanamo who are still bent on doing harm to America, Americans and our allies, so there will have to be some solution for the likes of them," Morrell said.

About 250 detainees remain held at Guantanamo and about 60 of those detainees have been cleared for release by the Pentagon, but their home countries will not take them or the U.S. believes they could be harmed by their governments if returned.

President-elect Barack Obama has said he intends to shut down Guantanamo. Earlier this week, two sources close to the Obama transition team said he could issue an order to do so as early as his first week in office, saying that Obama believes "the legal framework at Gitmo has failed to successfully and swiftly prosecute terrorists."

All About Guantanamo Bay • Barack Obama • The Pentagon