(CNN) -- More than 50 vehicles -- including a bus carrying Boy Scouts -- collided in a massive pileup on a snow-swept New Hampshire interstate Sunday, closing the highway in one direction for five hours, authorities and witnesses said. 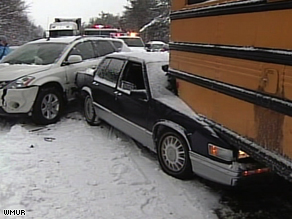 Cars and buses are crunched together after a major pileup on Interstate 93 on Sunday.

There were no fatalities and no apparent life-threatening injuries, although rescue personnel were working to extricate people from crushed vehicles on Interstate 93 near Derry, according to Lt. Chris Aucoin of the New Hampshire State Police.

Stephanie Hasenauer was traveling with her son on a bus taking about 30 Boy Scouts on a ski trip. She said the bus came upon an auto accident at about 9 a.m. and stopped.

Watch the aftermath of the massive pileup »

"It was unbelievable. There were cars, buses, 18-wheelers, plow trucks," Hasenauer told CNN. "Most people [in wrecked vehicles] couldn't get out of their doors -- they were climbing out the windows," she said.

"One guy who was further back, his car went under [an] 18-wheeler and couldn't get out. The first thing the firefighters did when they got there was try to save him."

Hasenauer said the bus was bumped by at least two cars but there were no injuries on the bus.

People in other vehicles were not so lucky.

"The worst thing I saw was this one family -- there was a man in his 40s, he had a lot of cuts, he had blood on his face and head," Hasenauer said. "We saw a lot of blood on the road and snow. One girl -- part of the same family -- had a big gash on her head."

Hasenauer said light snow was falling at the time of the pileup, and Aucoin of the state police said there was about 10 inches of snow already on the ground in the area.

At least 10 people were taken to area hospitals, Aucoin said, and traffic on northbound lanes of the interstate was blocked for nearly five hours until the highway was cleared. iReport.com: Did you see the pileup? Share photos, video

Hasenauer said the Boy Scout bus was stuck at the scene for about an hour but then turned around and headed home, and the Scouts would have to miss their ski trip because of the accident.

"It was just a huge huge mess," she said. "One kid got a little queasy when he saw the blood, but that's it. We'll see if the shock sets in tonight when they go to bed."

All About Accidents and Disasters • New Hampshire