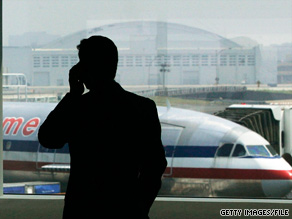 International roaming fees cost U.S. businesses an average of $693 per trip per traveler, says a survey.

Take what happened to P. Morgan Brown when his wife decided to take a spur-of-the-moment vacation to Indonesia.

Her Verizon bill came to a staggering $8,000. Text-messages home cost an astounding $2.50 each and the meter was running at an eye-popping $1.75 a minute for phone calls.

"We almost missed a mortgage payment when the auto-withdrawal for the first bill came through and wiped out our checking account," says Brown, who works for an Internet company in Aliso Viejo, California. "What a waste of money."

Stories like his are becoming more common, according to cellular industry experts -- despite some governments' best efforts to contain these exorbitant fees.

"The main reason is that people are using their phones more for data than voice calls," says Azita Arvani, a wireless industry consultant based in Los Angeles.

With a conventional call, users can gauge the cost per minute and adjust their talk time. But gauging data use isn't as straightforward. An e-mail, Web site or video can gobble up a lot more bandwidth than you'd think.

The European Union limited roaming charges two years ago. And this month, a new set of regulations go into effect that cap text-message costs to 11 Euro cents, limit data rates to a reasonable 1 Euro per megabyte, and boost requirements for billing transparency.

No comparable laws have been proposed in the United States, where the guiding philosophy behind this almost total lack of regulation is that market forces alone will stop wireless carriers from overbilling their customers.

Here's one way those market forces work: Brown dropped Verizon at his first opportunity and signed up with AT&T.

He doesn't auto-pay his cell phone bills anymore and rents a cell phone when he's abroad.

"My American cell phone is now for strict emergencies," he adds.

There's probably only one way wireless companies could make more from their roaming fees, and that's if they printed money in their basement.

A recent Harris Interactive survey found international roaming fees cost U.S. businesses an average of $693 per trip per traveler. In Europe, the typical wireless company generates between 3 percent and 10 percent of their revenue -- an annual total of 5 billion euro a year -- through roaming fees, according to the GSM Association.

"When you roam, you are using your phone on another company's network, not the network of your own wireless company," he says. "These other companies generally charge high wholesale charges to your company for using their network."

In other words, it doesn't actually cost $2 a minute to use another wireless company -- not to that carrier, not even to yours. It's almost pure profit.

But what can you do?

I asked myself that very question after landing in Vancouver recently.

I had fired up my AT&T iPhone, called home to tell everyone I'd landed safely.

I had checked out the roaming rates on the ATT.com site before leaving, and they seemed pretty reasonable. I assumed they would apply to me. Wrong.

After checking a few e-mail messages, a friend warned that AT&T would charge me a bundle if I didn't have a calling plan that included Canada.

Once I checked into my hotel -- which offered free wireless service, thank goodness -- I did a little research and found scores of AT&T customers who had paid thousands of dollars in unexpected roaming fees.

I could feel the color draining from my face. I contacted AT&T immediately, told a representative I was turning off my cell phone, and said I was deeply concerned about my next phone bill.

Don't let this happen to you. Here are a few strategies you can use to make sure you aren't hammered by these ridiculous fees:


If you're going to be away for a while, maybe you need a native cell phone.

Bruce Molsky, a musician based in Washington, buys a network-unlocked phone when he travels overseas.

"The total charges are usually less than a quarter of what AT&T would have charged," he says. "Plus I have the luxury of making and receiving calls in the country I'm in for normal rates."

If you're attached to your cell phone -- and let's face it, if your life is on your phone, you probably are -- or if it's just a short trip, then you might consider keeping your phone but switching to an overseas calling plan.

"You should be able to switch to that plan on a temporary basis, which would give you favorable rates abroad," says Mark Asnes, the executive vice president and chief operating officer of the cellular company Wireless Zone.

Typically, the rates are between 99 cents and $1.99 per minute. (Still not cheap, but about half what you'd pay if you were plan-less.)

Voice Over IP -- using a PC or other Internet-connected device to make phone calls -- is a popular alternative to making cell phone calls overseas.

Michael Brein, a psychologist based in Honolulu, uses a VOIP service called Skype to make inexpensive phone calls when he's in Europe.

"So long as you have wireless access, then calling from your laptop to phone numbers using Skype-out can be as little as two cents a minute," he says.

He's also downloaded a Skype app for his iPhone, which allows him to make VOIP calls when he's near a high-speed wireless network.

You might be able to have it both ways -- that is, keep your phone and get a lower rate than the one offered by your wireless carrier.

Andy Abramson, who edits a telephony blog (http://andyabramson.blogs.com/) swaps out the SIM cards on his phone when he travels.

A SIM card, shorthand for a Subscriber Identity Module, effectively lets you change your phone number to a local one when you're traveling.

"I buy local SIMs in country or a travel SIM from SIM4Travel or MaxRoam," he says. "Both offer competitive rates."

It's the only way to be absolutely sure. The moment you power up your phone, you're in danger of passively checking e-mails or voice mails and incurring unconscionable roaming charges.

So the best way of avoiding overseas roaming charges is to not bring your handset at all.

Which isn't to say you can't fight these fees. Steven Frischling, a New York travel consultant, returned from a recent trip to Detroit to find a $500 international phone bill.

"I was unaware that my T-Mobile BlackBerry was repeatedly hitting the GSM towers across the river in Canada," he recalls.

But after supplying T-Mobile with sufficient documentation that he was in Michigan, the wireless carrier corrected his bill.

My run-in with AT&T had a happy ending, too.

After a month or two of polite correspondence with a customer service representative, the charges were promptly removed "as a courtesy."

Next time, the iPhone stays home.