Stockholm's noble past and present

(Tribune Media Services) -- With its steel-and-glass Modernist buildings and dedication to green living, Stockholm has the feel of a gleaming metropolis, but it offers a satisfying mix of old and new, from a well-preserved 17th-century warship to its glittering 20th-century City Hall. 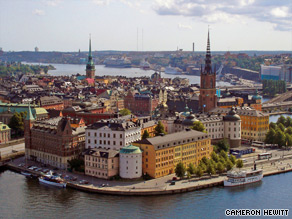 Before you visit, study up at www.stockholmtown.com and when you arrive, buy a Stockholm Card, covering nearly every sight and all public transit. (Only a Swedish meatball would drive his car in Stockholm; park it and use the excellent public transportation system instead.)

Stockholm, with 1.8 million people, is built on an archipelago of 14 islands woven together by 50 bridges. Gamla Stan, the city's historic island core, is an Old Town of winding, lantern-lit streets, antiques shops and classy cafes clustered around the Royal Palace. The palace hosts a fun, spirited changing of the guard ceremony, and contains the Royal Armory, with Europe's most spectacular collection of medieval royal armor.

Famous Swedes include Astrid Lindgren, author of Pippi Longstocking (found in bookstores all over town), and Sweden's most famous sculptor, Carl Milles, whose statues are strikingly displayed in Stockholm's dramatic cliffside Millesgarden.

But let's face it. Most people know Sweden as the home of ABBA, the '70s pop band whose bouncy songs are the driving force behind the hit play and movie "Mamma Mia!" Plans for an ABBA Museum in Stockholm were recently scrapped because of a dispute over costs, and the museum will instead become a traveling exhibition. Dancing queens -- and kings -- will have to wait to pay homage.

Even without ABBA, Stockholm has plenty of sights to keep tourists busy. For a trip back in time, Skansen is Europe's original and best open-air folk museum. It's a huge park with more than 150 historic homes, shops, churches and schoolhouses transplanted from all corners of Sweden. The old interiors are wonderfully furnished, complete with guides dressed in traditional outfits. There's folk dancing nearly every evening. Think of it as Swedish-culture-on-a-lazy-Susan, where visitors can sweep through the countryside and centuries of lifestyles without leaving the capital.

Near Skansen, the mighty warship Vasa is chemically petrified and housed in a state-of-the-art museum. Heralded as the ultimate warship of her day, the Vasa sank just minutes into her maiden voyage, with 450 crewmembers on board. The year was 1628. The ship was top-heavy, with an extra row of cannons tacked on above and a lack of ballast below. A breeze caught the sails and blew it over.

The ship spent more than 300 years at the bottom of Stockholm's harbor. In 1961, with the help of steel cables and huge inflatable pontoons, the Vasa rose again from the deep. And the city managed to turn this titanic flop into a brilliant museum and one of Scandinavia's great sightseeing attractions.

While churches dominate cities in southern Europe, in the Scandinavian capitals, city halls take the lead. It's clear that Stockholm's City Hall rules the city. Constructed in 1923, it's an amazing mix of eight million bricks and 19 million chips of gilt mosaic. To see the interior, take the entertaining tour. And for the best city view, climb the 348-foot-tall tower (an elevator takes you halfway).

At the Nobel Museum, opened in 2001 for the 100-year anniversary of the Nobel Prize, portraits of all 700-plus winners hang from the ceiling, shuffling around the room like shirts at the dry cleaner's (miss your favorite, and he or she will come around again in three hours). The museum's Viennese-style cafe is the place to get creative with your coffee ... and sample the famous Nobel ice cream. All Nobel laureates who visit the museum are asked to sign the bottom of a chair in the cafe. Turn over your chair and see who warmed the one you're on.

Nobel winners stay at Stockholm's Grand Hotel. Even if you're not an honoree, it's still worth a visit for the best smorgasbord in town. Here are some of the traditional dishes you'll find: herring, boiled potatoes, knackebrod (Swedish crisp bread), gravlax (salt-cured salmon flavored with dill and served with a sweet mustard sauce) and meatballs with gravy and lingonberry sauce.

If you just want to put on a heavy coat and drink a fancy vodka in a modern-day igloo, consider the fun, if touristy, Absolut Icebar. The room, windows, bar and even the glasses are literally made out of ice.

While modern and progressive, Stockholm reveres its traditions. Whether you're celebrating ingenuity at the Nobel sights, strolling through the cobbled Old Town, or crawling through Europe's best-preserved warship, you'll be amazed by Stockholm's stunning past and present.