ON THE ATLANTIC OCEAN (CNN) -- Up on the Lido Deck there is a rockin' band playing another love song. 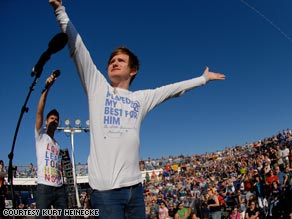 Rush of Fools gets the crowd going during an afternoon concert on the Lido Deck.

Hundreds of people, many clad in bikinis or swim trunks, maneuver deck chairs, trying to maximize their worship time in the sun.

Servers mill around the deck, trying to interest potential patrons in fruity concoctions. Other cruisers peer back at the band as they stand in the buffet line for an afternoon snack.

The band stops, thanks the crowd for joining them on the ship and talks about why they are here. They are here to praise God.

This is the K-Love Friends and Family Cruise, a four-day Christian music retreat filled with concerts from all types of bands that share one message.

"You look out at that ocean and you realize you are looking at a very small chunk of the big picture," says David Carr, drummer for the contemporary Christian band Third Day. "It reminds me of how small we are and how big and expansive God is, yet He still loves us."

More than 3,000 fans are on board the Destiny for this floating meet-and-greet bound for Grand Turk. Premier Christian Cruises has chartered the whole ship and has filled each day with concerts, shows and speakers. It's the sixth time Premier has put on this event.

The Destiny, owned by Carnival Cruise Lines, is the largest ship the group has ever chartered, says Gary Gentry, one of three owners of Premier. It's one of three full-ship and one partial charter the company puts on each year.

The Friends and Family Cruise features 15 bands as well as comedians, an illusionist and speakers. You can see an author in the morning, a rock band in the afternoon, a singer-songwriter in the evening and a big band late at night.

"To me, life is about making moments," Gentry says. "I think that's what we have been able to do on the cruise, help people create moments of significance in their lives."

He compared putting all the bands together on a ship with some of their most loyal fans to the amateur chemistry sets kids love to play with to surprising results. "You don't know what's gonna happen, but you know it's going to be kinda cool."

Music cruises have been around for decades but charters are a growing trend in the cruise industry. Each year more companies are renting entire ships not only for Christian artists but for all genres of music. There are events for jazz fans, rock fans, even polka fans.

Andy Levine runs Sixthman, a music cruise organizer that connects fans with artists such as John Mayer, Sister Hazel and Emmylous Harris. He says his company is thinking about expanding from five rock music-themed cruises to seven this year and eventually nine.

Levine used to work in the music industry and said there are so many walls now between performers and fans that there's almost no real interaction between them any more.

"Going on a cruise with your favorite artists is one of the coolest ways to make a real pure connection," Levine says by phone, before boarding a ship full of Barenaked Ladies fans.

The biggest challenge for charter companies is to convey to fans the premium costs that come with a music-themed cruise compared to a standard voyage. (Rooms on the K-Love cruise for 2010 run between $599 and $6,600 and it is already 80 percent sold out.)

"If they were to go to a music festival instead they would have to pay a small fortune, more than they would on a music cruise," says Linda Coffman, who operates the Web site cruisediva.com and has sailed on more than 100 cruises. "There are hotel costs, food costs and ticket costs, so when you consider all the things included on the ship, music cruises are a good deal."

She adds that one thing you can't put a value on is included in the cruise. Many of the artists will stop and chat with the fans out on deck or in the hallways. Or if a fan sees their favorite singer walking around the pool, it's often OK to ask for a quick picture. (Most cruises do set up autograph sessions and tell fans that is the best time for such requests).

It's not only cool for the fans, who might find themselves standing in a buffet line right next to the bass player in their favorite band, it's also cool for the artists, who get to see up close what they mean to people.

A woman approached bassist Tai Anderson on the K-Love cruise to tell him how much Third Day meant to her during what had been a painful divorce. She told him how every morning she went for a run, and played their music while she tried to jog away her sorrow.

"Christian music can be an easy target for people to make fun of," Anderson says. "[Critics say] it's derivative or not its own style but at the same time when I see people have connections like that, it encourages me because it's a pretty incredible thing."

Fans sometimes also get to see reunions of bands that haven't played together in years.

No one had to ask Kirk Sullivan twice to come on what was his 15th Christian music-themed cruise. Sullivan has been a solo artist for the past two and half years, since the group he sang with for 15 years, 4Him, disbanded. But the folks from Premier called him up and said they wanted the group to do one more show.

Sullivan, who has an album due out this spring, loved the chance to see some old friends.

"I think what I miss is seeing them on a regular basis," Sullivan says. "There's not anybody else I'd rather stand on stage with."

As he talks, a woman stops by the table to say hello. She tells him how much she enjoyed the show. He promises to come by and chat with her later. He explains that she and her husband attended a lot of 4Him shows and he's seen her on past cruises.

The cruises also give the performers a chance to see other artists for more than just a passing moment, he said. Most musicians rarely get to hang out because of their schedules but on the cruise, band members get a chance to catch concerts themselves and share dinner conversations with artists who are, as one performer said, in the same boat, so to speak.

Fans get a similar experience, says Stacy Conville, a doctor from Louisiana.

"It's refreshing to get away from the world and all that's going on," she says. "And to do it with other believers is encouraging."

All About Music • Travel and Tourism