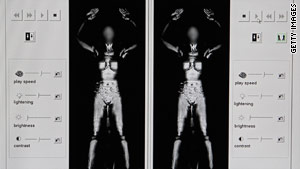 Washington (CNN) -- One hundred and fifty new full-body scanning machines are set to be placed in airports across the United States as federal authorities work to close security loopholes exposed by the attempted Christmas Day bombing of a U.S.-bound airliner.

The Transportation Security Administration ordered the scanners before the bombing attempt for up to $170,000 apiece. Plans are also in place to purchase an additional 300 units by 2012, TSA officials said.

Forty body scanners are currently in use at 19 U.S. airports. Use of the technology -- considered overly invasive by critics -- is optional, according to the TSA Web site. Passengers who opt out of the screening receive an alternate form of checking, which includes a pat-down procedure.

There are two types of full-body scanners. One uses "backscatter" technology to produce an X-ray image of a person. The other uses millimeter-wave technology, which shows a detailed photo negative.

TSA officials have attempted to address privacy concerns by promising to blur pictures of passengers' faces and delete all images produced.

One former TSA official told CNN that a body scanner could have stopped Umar Farouq AbdulMutallab, the man accused of trying to blow up a December 25 Northwest Airlines flight from Amsterdam, Netherlands, to Detroit, Michigan.

"I firmly believe in the whole body imaging system as a screening device," Charlotte Bryan said.

"I believe that it would have detected that there was something there in that position on his body. It may not have detected it as an explosive, but it certainly would've raised some flags that would have required further detection and a review either by an officer or further scanning."

Critics, however, warn that full-body scanners should not be the only answer to continued airport security problems.

"Right now the system is not working as effectively as it needs to be," said Geoff Freeman, a representative of the U.S. Travel Association.

"It's time to hit the pause button and do a wholesale review of what we have today and put in place the policies that will (give) America the most secure and efficient travel process."

CNN's Mike Ahlers and Sandra Endo contributed to this report