Federal air marshals back in spotlight after attempted plane bombing 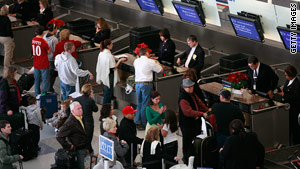 Federal air marshals are regarded as the last line of defense in aviation security, working on the ground and in the air.
STORY HIGHLIGHTS

(CNN) -- As a federal air marshal, Robert MacLean typically spent five days a week crisscrossing the country on commercial flights, reading a lot of newspapers and John Grisham novels while keeping an eye out and trying to appear inconspicuous.

"It was a well-paying job with enormous responsibility, yet extremely tedious and mundane," he said. "You did the same thing every day, there was nothing new. You sat in your seat and prayed that nobody would set off an IED or ambush you mid-flight."

If the air marshals are doing their job properly, the public does not learn about the incidents or potential catastrophes they've prevented, Department of Homeland Security spokesman Nelson Minerly said.

"Federal air marshals are trained to operate covertly and to blend in with the traveling public," he said. "They work in the air and on the ground as a last line of defense, but if they're doing the job right, you don't know they're there."

A federal air marshal was not on Northwest Flight 253 when a passenger allegedly tried to detonate explosives hidden in his underwear. But the agency said the incident prompted it to enhance airport screening procedures and put more air marshals aboard flights.

The Federal Air Marshal Program has been around in one form or another since the early 1960s, when a rash of hijackings of flights to Cuba prompted President Kennedy to order that federal law enforcement officers be placed on high-risk flights.

The Federal Air Marshal Service officially began in 1968 as the Federal Aviation Administration's Sky Marshal Program, and in the 1970s, extortion-type hijackings in the Middle East led to the deployment of some air marshals overseas. In 1985, President Regan expanded the program, increasing the number of air marshals, in response to a series of domestic and international hijackings, including TWA Flight 847, in which a U.S. Navy Diver was killed and his body dumped on the tarmac in Beirut, Lebanon.

The terror attacks of September 11, 2001, represented a turning point in the agency's history, when it grew from less than 50 officers to the several thousand currently employed as federal law enforcement officers in the TSA, Minerly said.

Law enforcement officers and military personnel made up most of the first recruits to join the agency's replenished ranks in October 2001, said Jamie Smith, a former federal air marshal instructor and current CEO of SCG International, a global security firm. Recruits are trained extensively in tactical operations and law enforcement procedure.

"They go through how to go hands-on with somebody in the tight confines of an aircraft, from how to disable an attacker from a seated position, how to fight if you fall down in the aisle, or how to use different items onboard to subdue and restrain attackers," he said. "They learn how to restrain them using seatbelts -- basically fold the person over and strap them down."

Trainees also learn the rules of engagement, laws related to use of force on airplanes and how to look out for suspicious behavior, or behavioral profiling.

"We'd teach them to look for mannerisms: specific styles of dress, whether they're with a group or trying to peel off from a group, or if a uniformed officer approaches and they shy away -- things like that. We'd teach them what to look for," he said.

Applicants with backgrounds in law enforcement and the military are given special preference, but the positions are open to anyone with a college degree or three years of professional experience who proves up to the job, Minerly said.

"Our training program is very comprehensive. We have people applying now with limited law enforcement experience and we provide them with the training to get them up to speed with what we expect of a federal air marshal," he said. "Air Marshals are supposed to look like the rest of the traveling public so it only stands to reason we would want recruits from all walks of life."

In the eight years since the Federal Air Marshal Service has been ramping up, only a handful of incidents have been publicly reported, most involving drunk or unruly passengers.

MacLean says he never had to make an arrest in five years flying missions as an air marshal. Yet his career ended in controversy, when he was fired for leaking information on cutbacks in the program.

Did he ever secretly wish for some action to break up the tedium?

"No way," he said, laughing. "Not when you're 35,000 feet up in the air flying at 500 mph in an aluminum tube with a few hundred people. You really don't want anything to happen."