Give the gift of armchair adventure 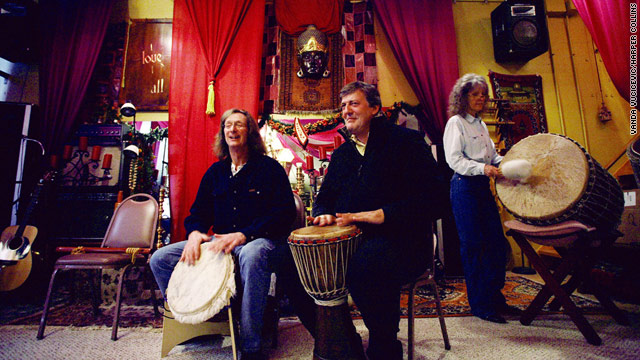 (CNN) -- Whether hungry for love, adventure, fun or food, readers on your holiday gift list can get their fill from a variety of travel books this holiday season. Here's a sampling of six dishes from the buffet.

Humorist Stephen Fry takes a genial English visitor's tour of the colonies in "Stephen Fry in America: Fifty States and the Man Who Set Out to See Them All" (William Morrow, 320 pages), a companion to his series on British television.

Fry took a black London taxi through every state from coast to coast, stopping often to chat with the locals, sample their food and soak up their culture, from a choir performance in a South Carolina Gullah community to a Ted Turner-guided tour of a vast Montana bison ranch.

Fry doesn't just observe, he participates, and therein lies much of the fun. He tries his hand at dealing blackjack in Atlantic City, New Jersey, playing bluegrass music in Kentucky, drumming with Native Americans in South Dakota, marching in a Mardi Gras parade in New Orleans, Louisiana, and more.

Closer to Fry's side of the Atlantic, noted golf writer Tom Coyne plays his way around the coast of the Emerald Isle in "A Course Called Ireland: A Long Walk in Search of a Country, a Pint and the Next Tee" (Gotham, 320 pages).

Coyne treated Ireland as one gigantic set of links, walking -- no carts, in the Irish tradition -- and playing every hole astride the sea on a four-month round of golf.

But the game was merely the means to put Coyne in touch with the land of his ancestors, its beauty, its people and their quirks. According to a Booklist review on Amazon.com, "Coyne visits nearly as many watering holes as he does water holes, and his play-by-play of pub life is every bit as entertaining as his recollections of purely hit five-irons."

The world looks different in the open air at 10 mph than it does enclosed in glass and steel at 40 or 60. The eccentric Byrne shares his unique view -- not so much of the scenery as of society's issues -- from the curb lane of such diverse places as New York (where he resides); Istanbul, Turkey; Manila, Philippines; and Detroit, Michigan.

While riding past a sidewalk cafe in one of those places, Byrne might have seen Simon Majumdar, who spent a year trying to fulfill his life's mission to eat his way around the world.

Majumdar left his boring desk job at age 40 to discover the flavors of the world. He found them not only in its food but also in the many friends he made along the way, described in fragrant detail in "Eat My Globe: One Year to Go Everywhere and Eat Everything" (Free Press, 304 pages).

He describes the serendipity of a train ride in Morocco:

"My carriage was full as we pulled out of the station and, within half an hour, everyone was chatting in a mix of Arabic and French. Soon, the food began to appear. Lots of it, loaves of soft bread, cheese, dried fruits, hunks of chicken someone had in a cold bag, and flasks of coffee and sweet tea. My contribution of half a pack of Pringles was shameful, but no one seemed to care, and I was invited to join the party as we all happily stuffed our faces until the train pulled into Casablanca's Voyageur railway station."

Casablanca conjures thoughts of romance, and the lengths we'll go to for love is the basis of Eve Brown-Waite's "First Comes Love, then Comes Malaria" (Broadway, 320 pages).

In a memoir that Kirkus Reviews calls "laugh-out-loud funny," Brown-Waite recounts how she met the unlikely man of her dreams when she went to sign up with the Peace Corps. The self-described pampered city girl was in for a radical realignment of her reality. Hence the subtitle, "How a Peace Corps Poster Boy Won My Heart and a Third World Adventure Changed My Life."

The pursuit of love takes her from the States to Ecuador, back to the States and then off to Uganda, where her dreamboat went to work for CARE. Apparently it's possible to mine humor from rat-hosting toilets and intestinal parasites.

If you're not necessarily looking for love but are looking for a good time, you may want to join Matt Harding, the man who made himself famous on YouTube by dancing a goofy, loose-limbed dance in locations across the globe.

In "Where the Hell is Matt? Dancing Badly Around the World" (Skyhorse Publishing, 240 pages), Harding shares his observations and photos of the dozens of locations where his viral video, viewed more than 75 million times, was shot.

The appropriately oddly proportioned book may serve as a snack to tide you over until your legs are strong enough for you to cue up the video again.